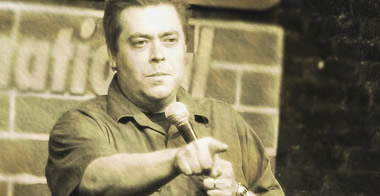 Since abandoning his successful pizza delivery career in 2000, Gabriel Rutledge’s combination of talent, hard work, and lack of a fall back plan have made him into one of North America’s finest touring comics. Although, honestly he hasn’t done much in Mexico.

A past winner of the prestigious Seattle International Comedy Competition, Gabriel has made television appearances on Comedy Central’s Live at Gotham, the nationally syndicated Comedy.TV, and Nickelodeon’s Nickmom Night Out.

He is also a frequent guest on the Bob and Tom radio show, heard in over 150 cities.

He has made at least 4 people pee their pants.

Gabriel is a Capricorn. His favorite color is orange. His favorite food is ice cream. He has brown eyes and brown hair. He lives in Olympia Washington.

When no one else is around he likes to listen to “Styx Greatest Hits.” He was born in 1973. He has two parents, two brothers, two daughters, one wife, one son, one mother-in-law, and one vasectomy. In 2nd grade Gabriel finished second in the school spelling bee. The word he lost on was “machine.” Gabriel was voted “Most Inspirational” on his 9th grade baseball team. He graduated from high school in 1992 with a G.P.A. of 2.8. Gabriel is 5’11. He doesn’t want you to know how much he weighs, but it’s less than his high bowling score, which is 252.