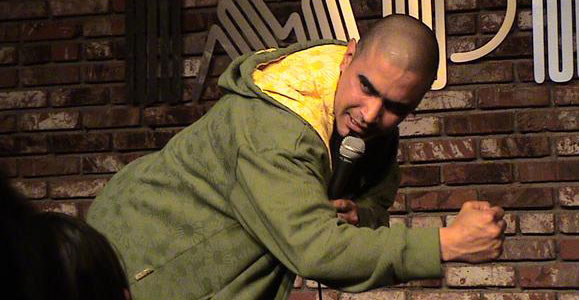 George Perez is one of the best up and coming comedians of his time. His wit and charm capture an audience and from there on the laughs are unstoppable. His street smarts and charismatic personality poke fun at the harsh, yet hilarious realities of growing up as a Latino in today’s society. He uses his own life experiences as his anecdote to every joke. His poise and familiarity with growing up in the streets, becoming a young father, and tearing down every stereotype has aided George in becoming a better comic. It also allows the audience to relate to him on a higher level; making his comedy that much more real and amusing.
In the past seven years George has had the opportunity to enlighten audiences with his comedy in clubs all across Southern California and the Mid West. He has appeared on numerous television shows, such as Comedy Central, SHOWTIME, PAYASO COMEDY SLAM,LATV Live, Loco Comedy Jam, Mind of Mencia, Master P’s Black Superman and starred in three episodes of MTV’s Yo Momma, where he got to use his sly wit and quick thinking to win his episode. After working with Wilmer Valderama, he was asked to return for the Best of LA episode as a final competitor.