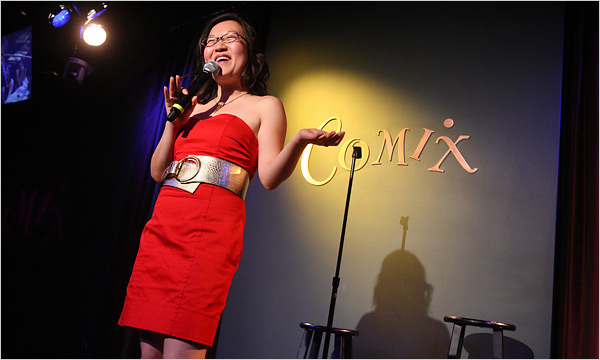 Helen Hong is a comedian, TV personality, dating coach, and star of TV Guide Network’s “Count it Down” series and Logo Channel’s reality dating series “Setup Squad.” Helen’s adorable stage presence and mischievous point of view have landed her on The Huffington Post’s Favorite Female Comedians list and a profile in The New York Times. She’s been featured on Fuse, E!, TLC and PBS.

As a standup comedian, Helen’s “cute little Asian girl” demeanor leaves audiences totally unprepared for her naughty and irreverent material. She was a semi-finalist in the 2011, 2008 and 2007 NY’s Funniest Stand-Up Competition, was selected for the Emerging Comics Showcase at the 2007 NYC Underground Comedy Festival, and was a semi-finalist in the 2006 California’s Funniest Female Contest. Helen has performed across the country, including at The Borgata Casino in Atlantic City, in Puerto Rico for Armed Services Entertainment, and at dozens of colleges and universities.

Helen is the creator and host of a popular comedy-matchmaking event called “Laugh Match.” She stars as a professional wing-woman in Logo Channel’s “Setup Squad,” a reality series about a New York dating agency. When she’s not playing cupid or making people laugh, Helen enjoys karaoke, NPR, and cheese.