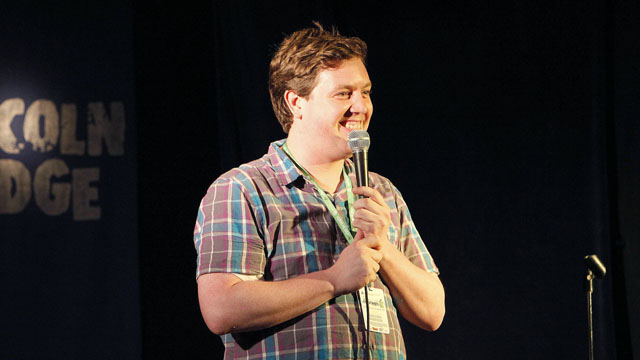 My father was a coal miner in West Virginia. My father’s father was also a coal miner. My mother’s father was a coal miner, a farmer and a pentecostal preacher. This is all true!
I grew up outside Morgantown, West Virginia on a road called Cassville Hollow. West Virginia is of course known for its scenic natural beauty in addition to its giant mountains of burning tires. As kids my brother and I spent a lot of time playing in the woods without adult supervision. This was extremely dangerous and we would often end up accidentally swallowing poison ivy or getting rocks lodged in our ears. This is how I gained the survival training which allows me to thrive in any environment (desert, rain forest, tundra, zero-gravity).

As a child my interests ran toward literature, theater, and drawing pictures of dragons and elves. These are the same interests I have now.

In school I was picked on mercilessly by boys with more athletic prowess than myself. Often they had unlikely redneck names that involved obscure pairings of initials; names like “W.P. Chedester” or “K.R. Coultrane.” I was given the nickname “Big-head,” not for my above-average intelligence but because I have an above-average size head.

At age 16 my family moved to Knoxville, TN, often called “The Cultural Mecca of The Appalachians.” I am the only person who calls it that.

At 18 I was invited to attend The University of Memphis on full scholarship. I used the scholarship to pursue a major in theater, which is the educational equivalent of winning the lottery and spending all the money on dream-catchers and beanie babies.

After college I moved to Chicago where I finally tried my hand at stand-up comedy. I quickly ascertained that it was the greatest of the performance arts for several reasons-
1)  No props (unless you are Carrot-Top, whom I have nothing but utmost respect for)
2)  No costumes (though I sometimes wear a false moustache spirit-gummed to my face)
3)  No rehearsals (which leaves more time for sleeping, eating, then sleeping again)
5)  Free beer! (comedians are often given ‘drink tickets’ in lieu of pay early in their careers or currently in their careers)

In Chicago I gained some small notoriety as a comedian and about sixty lbs. When I landed a TV Spot on Comedy Central (the network that brought us Krod Mandoon!) I knew it was time to move on. In 2008 I moved to New York City where I was greeted by the populace with a resounding “Hey! I’m walkin’ here!” and pushed unceremoniously into the gutter.

Today I am a working comedian of semi-national renown who is invited to bring my uniquely humorous perspective to locales as exotic as Bluffton, OH or Durango, CO. As an entertainer I am bi-coastal, which means I enjoy having sex on both the east and west coast. Preferably right there on the beach. I am loving the life of an itinerant artist and invite you to contact me at this address if you would like me to perform at your daughter’s Bat Mitzvah.