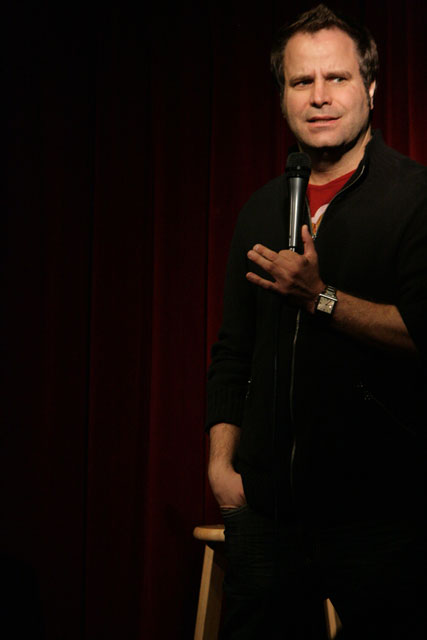 Jason Lawhead is more than a stand-up comedian, he’s a fun guy. His quick wit and likable personality enables him to be a multi facetted talent. A remarkably fresh outlook on topical issues branded with a charmed delivery and unorganized life-lessons makes Lawhead funny from start to finish.

The Ohio born Comedian makes the audience feel as if they themselves where involved in the stories and jokes he tells. Great at thinking on his feet, Lawhead is able to blend personal experiences, fresh subjects & facial expressions all ranging from topics about sports & life to questioning relationships and most off, himself. His ability to do voices may come from being the youngest of seven children. Jason always had a built-in audience and would often mimic household life by doing impressions of his siblings and parents which he brings to the surface today.

Jason is excited to be launching his new Podcast “Lawhead’s Court” in 2013 as well as his debut CD which will be available later this year. Lawhead has also done sports commentary for the MMA League “Cage vs. Cons” as well as formerly Co-Hosting Shubert’s Alley on Sirius XM’s Blue Collar network with friend and fellow comedian Jimmy Shubert. An experienced play by play voice of basketball, football & baseball, the Lorain, Ohio native called local high school games in the area. He has competed in comedy and film festivals from Boston to Los Angeles. Upon headlining the House Of Blues in Cleveland, Jason received a standing ovation at the Charleston Music Hall in South Carolina opening for Bill Burr. Jason is a frequent guest on many radio shows in markets all over the U.S., especially sports talk shows & has been heard on ESPN and Playboy Radio along with appearances on television. Jason has become a fixture opening for the likes of Bill Burr & Sebastian Maniscalco on the road as well as headlining himself.

Jason also uses his radio, television and performing back round to serve as MC and Host to several non-profit and charitable organizations raising millions of dollars for cancer, epilepsy and blindness just to mention a few. Now living in Southern California Jason has performed at Theaters, Clubs & Private Events all over the country. A self proclaimed dreamer, Lawhead appreciates every chance he get’s to make people laugh by doing what he loves and golfing.