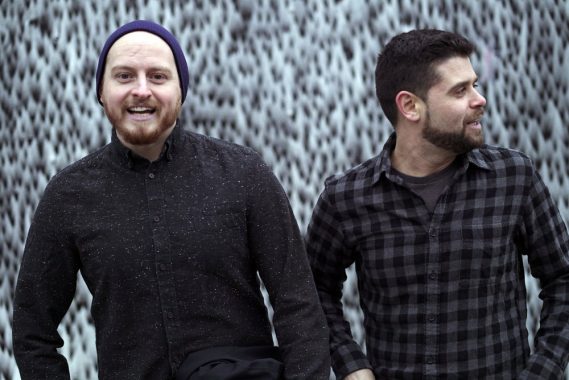 Jay Wells L’Ecuyer & Eytan Millstone are professional sketch comedians and award-winning filmmakers based in NYC. Currently, Jay & Eytan perform monthly on ‘The Interrobang Presents: The Comedy Records Showcase’ at The New York Comedy Club. Their sophomore album, ‘So Busy So Tired’, produced by Comedy Records, premiered at #1 on iTunes in 2018, and their debut album, ‘All Growed Up’, also reached #1 on iTunes in 2016. Both are played frequently on Sirius XM Radio, and are also available on iTunes, Google Play, and Spotify. The latest installment of the Jay & Eytan Web Series, ’Night Light’, recently premiered at The New York Short Film Festival and was nominated for Best Web Series at The Portland Comedy Film Festival. The first episode, ‘Meat Pie’, won the Audience Choice Award at the New York No Limits Film Fest.

Since making the move to NYC from Toronto in 2013, Jay & Eytan have performed live at Caroline’s on Broadway, The Stand, The Comic Strip, The Peoples Improv Theatre, The Upright Citizen’s Brigade, The Creek & The Cave, and regularly at The New York Comedy Club.

Several of Jay & Eytan’s sketch comedy videos have achieved viral status on YouTube and have been featured on College Humor & Funny Or Die. Their YouTube channel, ‘YouTube Comment Theater’, reached over 10,000 subscribers and 1 million video views.

As a duo, Jay & Eytan’s TV credits include ‘Upload Yours’ on The Comedy Network, ‘Cocktales’ on MTV Canada, ‘E-Talk Daily’ on CTV. They starred in the Canadian Comedy Award-Winning sketch, ‘That Thing That Happened’.

Jay & Eytan met at The Humber School of Comedy in September 2004 and trained in stand-up, improv, sketch & screenwriting under many professional comedians, including Robin Duke of SNL and Joe Flaherty of The Second City. They have been inseparable ever since.