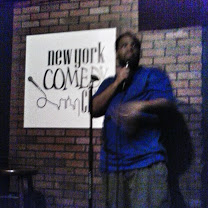 Jeffrey Frazier is a stand up comedian. He specializes in stand up, improv, and comedic writing. I like to make jokes about pop culture, politics, and religion. Even though I have an urban background I can do more than urban style of comedy. I have a very unique perception that is very different from other acts that are out right now, including the main stream comics. I did my first big show at the Broadway Comedy Club 6 months ago and after I did my comedic set other comics stated that I was a comedian’s comedian. I have many inspirations in comedy. My favorite comedian is George Carlin. Mr. Carlin was always able to give the most unique political perceptions. He used to Making of society’s social themes, social constructs, and humanities moral code.

The art of comedy give me an opportunity to challenge my mind. What I get about doing comedy is the fact that I am able to make people forget about their problems, because it is very hard times out here. People really need to laugh, and I want to find happiness inside myself by making other happy. Hopefully I can put myself in a position to make the world to be a better place. I want to take the time to thank anyone who reads this profile of me and I hope that you take the time out to come to one of my shows.