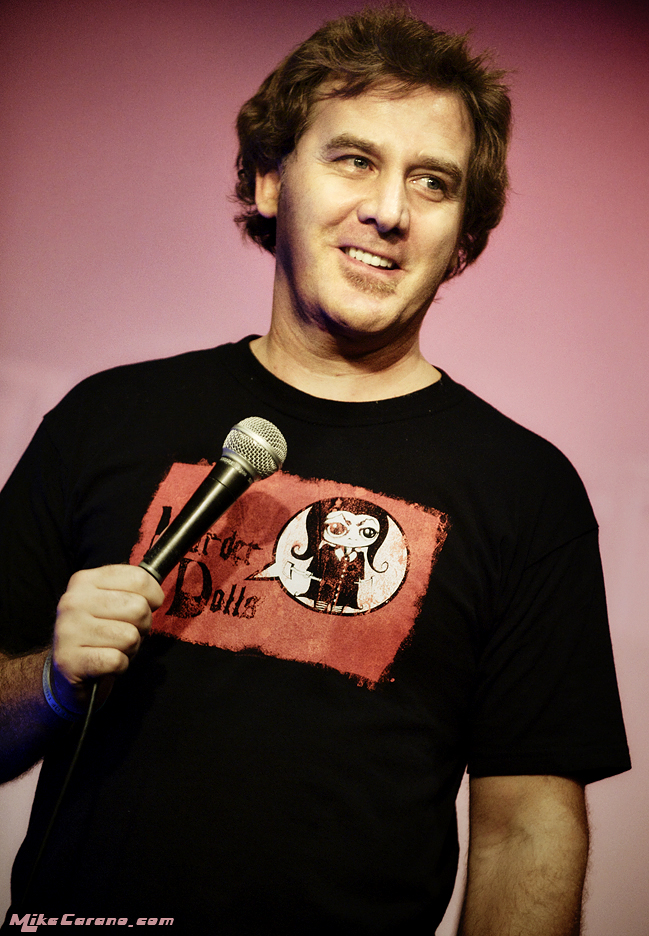 JIM FLORENTINE is a stand-up comedian, actor, writer, comedian, voice artist, and performer, who is currently co-hosting VH1 Classic’s hit heavy metal talk show series “That Metal Show” alongside Eddie Trunk and now label-mate Don Jamieson. JIM FLORENTINE is best known for his work on Comedy Central’s show Crank Yankers where he performed the voice of Special Ed, a mentally challenged teenager, and Bobby Fletcher, a despicable, alcoholic slob who is the older cousin of Ed. Recently, JIM FLORENTINE opened up the American Carnage Tour for Anthrax, Megadeth, and Slayer in arenas across the country. JIM FLORENTINE comments; “performing in front of 13,000 Slayer fans every night was insane! It was like emceeing a rape!” JIM FLORENTINE also appears in the feature film “A Little Help” starring Jenna Fischer (Pam Beesley of The Office) and Chris O’ Donnell (Scent of a Woman). JIM FLORENTINE plays the character Brian, who is Jenna Fischer’s love interest in the film. A Little Helphas already won best film in several different film festivals and JIM FLORENTINE appeared on the Jimmy Kimmel Live! on June 22 to promote the movie.

In June 2012 Jim just hosted the OMA Awards for MTV that aired worldwide. In Aug of 2012 That Metal Showthat Jim co hosts on VH1 Classic will be going into it’s 11th season. Jim also recently opened for the band Metallica at a festival called Orionfest that attracted over 50,000 fans!

“Being a fan of the Metal Blade label since its inception, it is truly an honor to be part of the family now. I will try my hardest to make the heaviest comedy album ever. So expect plenty of fat jokes!” comments JIM FLORENTINE.

Metal Blade Records CEO Brian Slagel adds: “I have always been a big fan of comedy and Jim is a great comedian. He is also a metal head and friend so I am so excited to welcome him to the Metal Blade Family!”

On Oct. 25 2011 Jim released his stand up CD on Metal Blade Records called Cringe N Purge. It landed at #3 on the Itunes Charts and #5 on the Comedy Billboard Charts. Here is one of the many positive reviews.

On Sept. 4 2012 Jim released his 2nd CD on Metal Blade Records called Awful Jokes From My First Comedy Notebook. That CD also landed at #3 on the Itunes Charts and # 10 on the Comedy Billboard Charts. Jim is only the 3rd comedian ever to have 2 CD’s land in the top 10 in the same year! The concept for this CD was that Jim stumbled across his first comedy notebooks from when he first started doing comedy back in the early 90’s. He couldn’t believe how bad his early jokes were and decided to share them with his fans and went into a recording studio and read his awful jokes directly out of his notebook. The CD has recieved massive critical acclaim in the comedy world for taking a huge risk. Check out this review

In 2011 Jim launched his weekly Podcast called Comedy, Metal, Midgets. It is one of the most popular comedy Podcasts out there constantly landing in the top 20 every week. You can listen and subscribe for free here. iTunes

History (taken from Jim FLORENTINE‘s Wikipedia page):
In July 2001, FLORENTINE released Terrorizing Telemarketers Volume 1. After numerous plays on the Howard Stern Radio Show, his CD ranking on Amazon.com went from 282,363 to number 2. The only artist ahead of him was the Backstreet Boys. Later that week, FLORENTINE‘s CD came in at #17 on the Internet Billboard charts.

After the release of Terrorizing Telemarketers Volume 2 in late 2001, Jimmy Kimmel and Adam Carolla took a liking to FLORENTINE‘s prank calls and hired him for a show to debut in June 2002 on Comedy Central called Crank Yankers. FLORENTINE played Special Ed, a mentally challenged teenager, and Bobby Fletcher, a despicable, alcoholic slob who is the older cousin of Ed.

After season 1, Eminem took a liking to FLORENTINE‘s characters and flew him out to his Detroit studio to do prank calls together for the upcoming season of Crank Yankers. The following year in 2004, Eminem and FLORENTINE did a bit together on the MTV Music awards show where Eminem beat up Special Ed, who kept annoying him (and tore his leg off). Crank Yankers lasted 3 seasons on Comedy Central. The show moved over to MTV2 in 2006 for one season. FLORENTINE‘s Special Ed character that he created is still played at various Sporting Events at stadiums across the USA.

FLORENTINE was featured on the series premiere of Down and Dirty with Jim Norton, a stand-up comedy series that aired on HBO on October 3, 2008. The series spotlights new and established talent, including Artie Lange, Bill Burr (Chappelle Show), Patrice O’Neal (Scary Movie 4), and Andrew Dice Clay. Lemmy, leader of the heavy metal band Motörhead, serves as the musical director.

Later that year, That Metal Show which FLORENTINE hosts made its debut on VH1 Classic. It’s described as “The Tonight Show for AC/DC fans”. He is also co-hosting along with Eddie Trunk and Don Jamieson. The show is currently in its 8th season.

FLORENTINE has a series of prank call CDs known as Terrorizing Telemarketers Volumes 1-5. The CDs feature a series of recorded telephone conversations, often with FLORENTINE receiving calls from telemarketers, wherein he turns the tables on often aggressive salespeople by being deliberately difficult and creating awkward situations.

In 2004, FLORENTINE worked one season on HBO’s Inside the NFL performing various comedy sketches. The show won an Emmy that season and FLORENTINE has proudly said in various interviews that when he was single he kept it on his night stand and it would close the deal anytime he had a date over. He called it his “Mariano Rivera”.

At the same time, FLORENTINE released two hidden camera DVDs called Meet The Creeps where he and his partner Don Jamieson pull outrageous pranks on people. The DVD has got in the hands of some Comedy Central executives and they brought Meet The Creeps to their broadband channel called Motherload. After the two successful seasons, Comedy Central did a Meet The Creeps pilot for the network. The pilot was deemed too mean spirited and the show never made it on the network.

Between 2004 and 2008, FLORENTINE made 3 appearances on Jimmy Kimmel Live! on ABC. He also appeared onThe Late Late Show with Craig Kilborn. In 2007, FLORENTINE appeared on the last episode of The Apprentice in season 4 doing his edgy stand-up comedy at a conservative charity event. He asked Trump’s partner George if he wears a diaper. He has not been asked back on the apprentice since. He is an occasional guest on the late-night Fox News Channel show Red Eye w/ Greg Gutfeld. Later in 2010, FLORENTINE appeared in the feature film A Little Help as Brian, the love interest of Jenna Fischer (Pam Beesley of The Office).