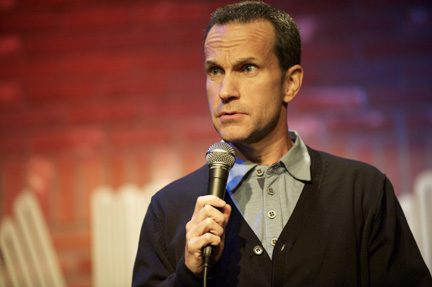 Jimmy Pardo is as funny talking to a stranger in an elevator as he is talking to a crowd from the comic stage. That’s because everything he observes or thinks, he immediately scans to find the funny. And he always finds the funny. After Jimmy was told for like the thousandth time that he was even funnier offstage than he was onstage, he dropped most of the jokes from his act. Now he spends nearly his entire set interacting with, and making fun of, his audience. And they love it.

Jimmy stands at the very center of the comedy world. That’s not only because he’s the ultimate “comic’s comic,” (as he’s often called), but also because he represents where comedy is going, and everybody wants to come along.

Jimmy’s raucous-but-smart weekly podcast, “Never Not Funny,” has revolutionized the way comedians use the internet to connect with their audiences. It’s the No. 2 paid podcast hosted by a comedian, after Ricky Gervais’s. His guest list reads like a Who’s Who of comedy: Conan O’Brien, Ricard Lewis, Patton Oswalt, and Sarah Silverman have all been guests. Actors Jon Hamm, Ty Burrell and Craig Bierko have appeared on several of the funniest episodes.

“Never Not Funny” was voted by both iTunes and USA Today as one of the top podcasts of 2006 and 2007. It was an Editor’s Pick in the September 2009 issue of Esquire magazine. In 2010, GQ magazine called the show “The Number 1 Relatively Obscure Thing You Need to Be Paying Attention To.” The show, which started in Jimmy’s dining room in 2006, now regularly hits the road with live tapings at festivals like SF Sketchfest, MaxFunCon, the Vancouver Comedy Festival and Bumbershoot. Every year, Jimmy and Co. present the “Pardcast-A-Thon,” taping for up to 12 hours to raise money for The Smile Train.

Besides the podcast, Jimmy continues to headline at some of America’s top comedy clubs and currently works as Conan O’Brien’s opening act on “Conan,” getting the studio audience into a laughing mood before the show tapes (he did the same for Conan on “The Tonight Show”). In addition to providing content for Teamcoco.com and appearing on the show in sketches or as a frequent guest, Jimmy recently filled in for as Conan’s sidekick for several shows.

A true multimedia talent, Jimmy has frequently appeared on television and in movies. He has performed on “The Tonight Show with Jay Leno” and “The Late Late Show with Craig Ferguson.” He had his own half-hour special, “Comedy Central Presents Jimmy Pardo.” He hosted “National Lampoon’s Funny Money” on the Game Show Network, and was the co-host of AMC’s “Movies at Our House” for four seasons. He has hosted episodes of VH1’s “The Surreal Life” and “Love Lounge” and NBC’s “Late Friday.” He’s appeared on popular shows such as “Monk,” “That 70s Show,” and “Becker.” And he has acted in independent films such as “Relative Strangers” and “The Godfather of Green Bay.”

He has recorded three comedy albums, “Uno,” “Pompous Clown” and the soon to be released “Sprezzatura.”