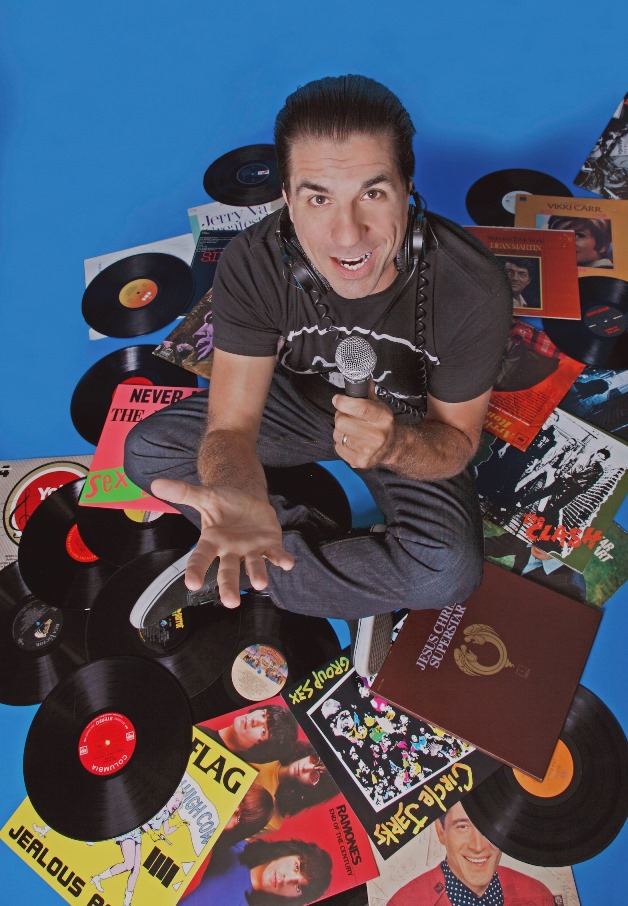 Joe Sib is a man who wears many hats. So many hats that he doesn’t get much sleep—and that’s just the way he likes it. Sib spent the 90s playing in punk rock bands with a relentless touring around the world, then moved behind the scenes as co-owner of Side One Dummy Records where he signed and released albums from bands such as Flogging Molly, The Gaslight Anthem, ANTI-FLAG, and many more. Ever the music enthusiast with a wealth of stories only a touring musician could boast, Sib began hosting the Complete Control radio show in 2004, which airs in seven cities across the country, including 98.7FM in Los Angeles. Instead of abating Sib’s energy, the show simply added more fuel to the fire and spawned not only his one-man show–California Calling: A Story of Growing Up Punk Rock—but also an unexpected leap into standup comedy.

California Calling is a 70-minute “broken word” roller coaster ride delivered with enough energy and passion to power an entire city. Sib began performing his multi-media show in 2009 and held residencies at the renowned Largo at the Coronet Theatre in Los Angeles, CA and performed to a sold-out crowd at the Punchline Comedy Club in San Francisco, CA during the 2011 SF Sketchfest. From there Sib took the show on the road and eventually began breaking the one-man show down into smaller bits. He took the stage at the 2010 Fun Fun Fun Fest in Austin, TX (he has been invited back for 2012) as well as the 2012 FYF Fest in Los Angeles.

As Sib’s craft grew, it transformed and took on new dimensions and made the natural transition into straight up stand-up. Sib continues to work like a mad man, hitting the comedy circuits and making a name for himself in the comedy scene. Bringing the charisma and presence of a frontman who’s used to commanding massive crowds, boundless energy and enthusiasm of a teenager, and the relatable everyday experiences of family, friends, jobs, and music, Sib’s created his own unique brand of stand-up. Sib is an all around funny guy and family man who gets it. To hash out new material, he pops in to Los Angeles and Orange County-area comedy clubs regularly.

Last year, in conjunction with the Hollywood Laugh Factory, Sib established The Bare Bones Show, the ultimate version of the modern day variety show. Every third Thursday of each month, Sib hosts and cureates a night made up of the best comics, story tellers, magicians, and musicians. The only way to describe the show is “planned chaos” because you never know who might show up, get on stage and hijack the night. Aziz Ansari , Dane Cook, Bobby Lee, Daniel Tosh, Chris D’Elia, and Iliza Shlesinger are just a handful of comics blatantly name-dropped here who have stopped by The Bare Bones Show unannounced.

Musician, label owner, radio host, stand-up comic, a husband and father of two… no wonder Joe Sib never sleeps these days! If you get the chance be sure and check out Sib on stage performing and hosting his own DIY take on comedy, breaking rules and making his own.

“At this point in my life,” reflects Sib, “there’s no turning back. My kids’ friends are always saying to them, ‘Why is your dad always dressed in black? Your dad skateboards?! Did your dad just call you ‘dude?’” That’s Joe Sib.

Are you coming to Hollywood California? Catch Joe Sib at The Hollywood Laugh Factory every third Thursday of the month at 10pm for The Bare Bones Show. The Bare Bones Show is the 2012 version of the ultimate variety show. Sib host’s the night made up of the best comics, story tellers, magicians, and musicians! The only way to describe the show is “planned chaos” because you never know who might show up, get on stage and hijack the night. Here are just some of the comics who have stopped by unannounced Aziz Ansari, Bobby Lee, Dane Cook, Daniel Tosh, Chris Delia, and Iliza Shlesinger. Hope to see you there!