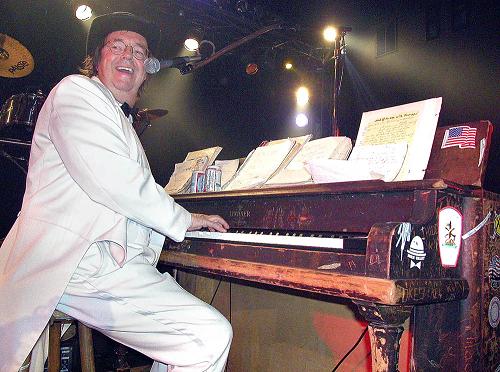 After spending an evening with John Valby, Audiences find themselves wanting more and more of him.What makes Valby so unique and entertaining is his uncommon rapport with the audience and his ability to mix his musical Talent with a mad-cap variety of “Dirty Ditties”. Few people can resist laughing at songs that would have earned them a mouthful of soap when they were children.Valby’s repertoire is composed of popular songs, limericks, classical arrangments and his own original creations.Valby has made a career out of poking fun at his audiences, stretching the limits of free speech and accepted good taste and satirizing current events from behind the piano.

When he’s not playing and singing, he yells obscenities:the audience yells back and everyone has a good time. The best way to descibe John Valby is to blend the following performers together. Allen Sherman, spike Jones, Lenny Bruce and Wierd Al Yankovic all topped off with the Dirt of Redd Foxx,Only better. Mr.Valby’s background started out innocently enough.As a teen-ager,he attended Mcquaid Jesuit High School in Rochester MY Where the Catholic nuns taught him how to play the piano.Valby attributtes his love of music to his father Richard, an accomplished violinist.

The “Dirt singing” did’nt start until Valby got to Middlebury College in Vermont.Majoring in Philosophy, He created a few compositions for his fraternity brothers, many of which are stll being sung today-as part of his Legacy. In fact ;Valby’s performance status remains Legendary at college campuses throughout the country. As a trained classical pianist,Mr.Valby quickly relized that the demand was limited. He turned to his new material by accident; found a trend and went with it.That trend started in 1975 when Mr.Valby was performing the Buffalo bar circuit doing ragtime tunes and pop standards.According to Mr.Valby; “I did Three Dirty songsone night & pretty soon the power of “DIRT” pushed most everything else out.I became a mirror for the audience and the Audience turned out to be 20 times DIRTIER than me.”

Mr.Valby used to get annoyed that while he was on stage baring his soul to the audience, the crowds would yell,”sing more DIRT!” His manager named him “Dr.Dirty” and the rest is History.Mr.Valby goes on to say,”I’m performing a service.I can’t get too egotistical about what the audienceshould hear.I’m supposed to entertain.”and entertain he does. Mr.Valby wears a white tuxedo,derby and black bow tie,while supporting the grin of a Leprechaun.He sings a slew of “DIRTY” songs.,complete with Fraternity references to Genitals & intercourse.Nothing and no one is sacred around Dr.Dirty,but he accomplishes his act with easeand finesse.”You have to look clean,and smile alot,”Mr.Valby once remarked Few entertainers have such a one-to-one relationship with there audience.He doesn’t target one group in particular.He smiles with them,laughs with them, jokes with them,and makes everyone laughat themselves.

Mr.Valby has recorded & produced over 30 CD’s & Lp’s which bear such titles as: compact Dirt, Sit on a happy face, Give me Dirt or give me death,Operation F Iraq and many other titles that cannot be printed.He has also recorded clean material including a christmas CD; and the non-Dirty Lily White and burnout Blues.He has worked on a number of other projects;including a multi-era Rock’n-roll cd by the Krakup quartet,some new age music,and believe it or not a children’s album. Mr.Valby resides in Western New York with his wife Anne & his five Children. He continues to be the mainstay at comedy clubs, rock, clubs, college campuses and basically wherever people like to LAUGH OUT LOAD!