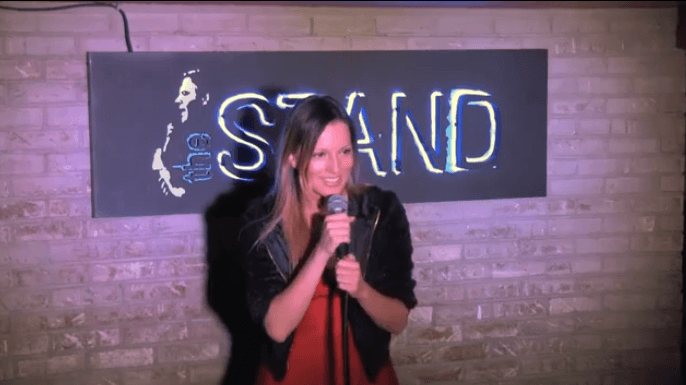 Julia Melim is a Brazilian actress who lives in New York City. She’s the NY Correspondent and TV Host for Hollywood TV covering red carpet events in Manhattan and The Hamptons. Previously she worked as a TV Host for Brazil Soul TV in Los Angeles. She’s also a stand-up comedian, tv host and model. She can be seen performing at The Stand NYC, The Broadway Comedy Club, The Comic Strip NY and The Comedy Store in LA . So please keep checking back for updates on her future shows.

She participated in the NY’s Funniest Reporter competition and received second place, and recently won the audience award at The Stand NYC, performing at their monthly comedy show “The Lemonade Stand.”
Julia is considered “a red carpet staple” in Hollywood, made celebrity appearances in Hollywood clubs, gifting suites and attends various film festivals in the U.S. and internationally, including the Tribeca Film Festival, NY Film Festival Cannes Film Festival, LA Film Festival and the Rio Film Festival. She has several celebrity spreads published about her remarkable career as well as interviews on TV and radio.

Melim is known for her work in the feature Death of Evil directed by Damian Chapa, Blood Bond directed by Frank E. Garcia and The Incredible Hulk with Edward Norton directed by Louis Leterrier. She also wrote, directed, and starred in the film Hard to Quit, which premiered at the first edition of the Los Angeles Brazilian Film Festival.

Her upcoming features include Sofia Coppola’s latest film Somewhere Executive Produced by Francis Ford Coppola, War of the Dragon directed by Stan Derain, Volcano High produced by Showscan Entertainment and many others to be shot in Los Angeles, Michigan and Rio between 2010 and 2013.