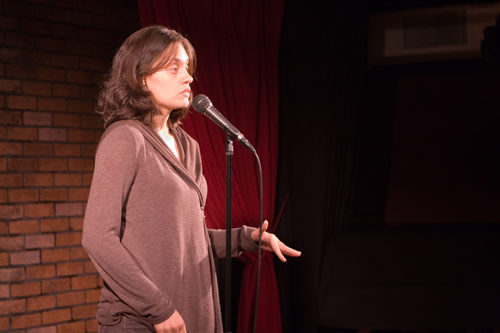 Julie Kottakis is a single mom, lawyer, writer, and comedian. As one of New York’s comics on the rise, Julie’s unique views on dating, parenting and other mundane topics, make her act memorable and also sort of disturbing. She won New York City’s Funniest Lawyer of 2010 and NYC’s Most Incredible Comedian 2012 at Broadway Comedy Club. Julie performs at various comedy venues throughout the New York City area, namely the Comic Strip Live and Broadway Comedy Club. She performed in the Ladies of Laughter Festival 2012 and the Laughing Skull Comedy Festival 2013. In addition to standup, Julie writes and performs sketch comedy and is a regular contributor on the podcast, Three Dudes and a Broad, as their “quirky” Legal Analyst. Despite her busy schedule, Julie is always available to share her “Mommy” secrets for new parents. For example: How to differentiate your kid from all the other look-a-likes at the playground and other such concerns.