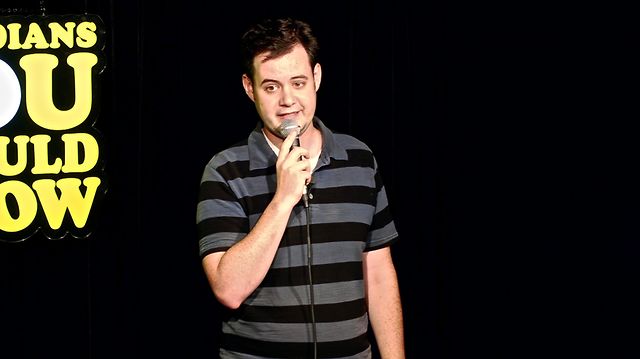 Kevin McCaffrey is a comedian and writer based out of New York City. He made his network TV debut on The Late Show with David Letterman in November of 2013, and he currently appears every week on “truTV Presents: World’s Dumbest”, and History Channel’s“I Love the 1880’s”. In 2014 he will appear on VH1’s “I Love the 2000’s” series.

Originally from Chicago, he graduated from Ball State University despite the school’s general policy of taking attendance. Since then he has been a contributing monologue writer for The Late Show with David Letterman. Kevin has also appeared on The Late Show many times as an actor, once being hosed down by Dave with a fire extinguisher. To his knowledge, this is an honor Kevin shares only with Richard Simmons.

When asked to describe his exceedingly unique brand of comedy, Kevin says “What I do, is I try to say stuff that’s funny.” That’s how avant-garde he is! As a performer, he relies on content more than volume; he’s not the crazy props guy, the crazy angry guy, or the crazy fat guy. At least not yet.

Kevin has also written for VH1, National Lampoon, Fuse TV, and various celebrities who want something kind of funny to say at awards shows. He hosts Technically Tomorrow, a late night/early morning talk show on Queens Public TV in New York, that can also be seen on vimeo.com. He writes and performs sketches with Vicarious George, some of whose videos can be seen onfunnyordie.com.