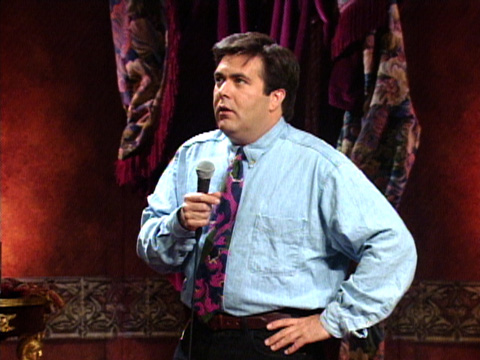 In a world of few absolutes, this is one: KEVIN MEANEY was born to entertain. From his earliest days as a singing altar boy at Mass, he’s gone on to achieve mass appeal for his singular brand of comedy that includes acting out stories, musical flights of fancy and telling tales on the family.

KEVIN MEANEY has been one of the country’s most popular standup comedians for more than 25 years. Tom Shales of the Washington Post said, “Picture the precocious love child of Jonathan Winters and Ethel Merman and you have some idea of Kevin Meaney’s act.”

Making people laugh has always been a top priority for Kevin. From his early years doing standup comedy in San Francisco and Boston he’s amassed an impressive list of credits along the way. His first HBO special in 1986 catapulted him to the forefront of the comedy scene. In 1987, Kevin made his debut appearance on The Tonight Show with Johnny Carson and was invited by Johnny to join the guest panel. Since his first appearance, Kevin has returned to the show a dozen times. He was a special guest on Saturday Night Live and has appeared on The Late Show with David Letterman, Regis, Oprah and Late Night with Conan O’Brien.

Kevin also starred in the CBS sitcom Uncle Buck which ran for a full season. In addition, he has done numerous guest appearances on both sitcoms and dramas. He also had a featured role in the movie Big.

Known for drawing upon his family relationships for much of his material, Kevin has made such lines as “That’s not Right” and “We’re Big Pants People” and “We’re going to lose the house” (delivered in the tremulous voice of his mother) catch phrases for hilarity. An evening with Kevin is a trip to the funhouse and one laugh escalates into a bigger one and good-hearted humor prevails.

Kevin is also a successful writer and producer. He wrote and produced and starred in a one-man autobiographical play titled Wedding Vows in Vegas which premiered at the prestigious U.S. Comedy Arts Festival in Aspen, Colorado before going on to a successful summer run in Boston at the Hasty Pudding Theatre. Steve Martin called it, “The most innovative, heart-rending and funny show I’ve seen in a long, long time.”

Then there is the Kevin Meaney Christmas Show, which is unlike any Christmas show you’ve ever seen before. Kevin has written and produced this show so as to combine his unique and irresistible brand of humor, his gift for singing, zany man-on-the-street interviews and featured comedy guests. The show is a wildly entertaining evening and has played in numerous theaters across the country.

In 2002, Kevin moved home to NY from Los Angeles and began working on Broadway in the hit musical, Hairspray. Hairspray has been a life changing experience for Kevin and during an interview on XM Radio’s Stand Up Sit Down on May 28, 2008, Kevin told the host that he was gay. It’s been a big transition but he’s seemed to find humor in how this all happened.

So, Big Pants People of the world unite… your leader is here, his name is Kevin Meaney and he’s on a mission of mirth.

Kevin is currently living in New York with his daughter.