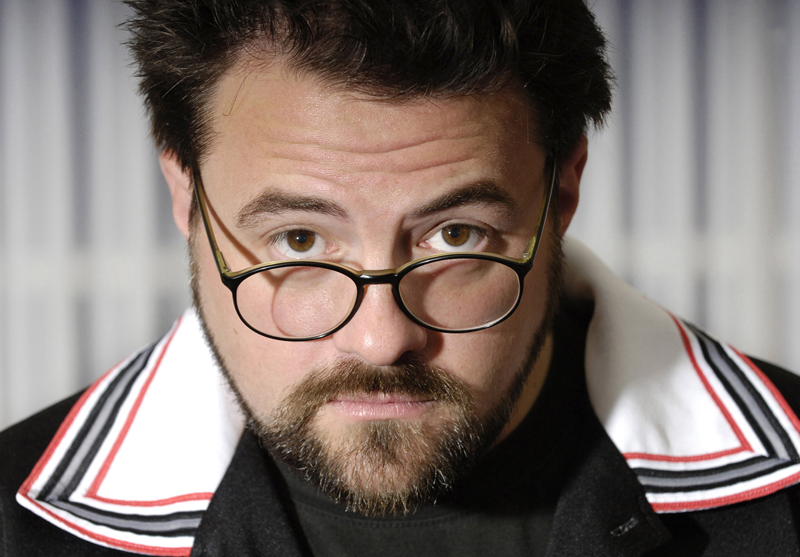 Kevin Smith Born and raised in New Jersey and very proud of it; this fact can be seen in all of his movies. His first movie, Clerks. (1994), was filmed in the convenience store in which Smith worked. He was only allowed to shoot at night after the store closed. This movie won the highest award at the Sundance film festival and was brought to theaters by Miramax. The movie went over so well that Smith was able to make another movie, Mallrats (1995). This movie, as Kevin has said, was meant to be a “smart Porkys”. Although it didn’t do well at all in the box office, it has done more than well on video store shelves and is usually the favorite among many Smith fans.

During filming for the movie, Smith met his new close friends and stars of his next movie, ‘Ben Affleck’ (qv, ‘Jason Lee (I)’ (qv, and his new girlfriend, Joey Lauren Adams. Smith has said that his relationship with Adams has been much of an inspiration for his next movie,Chasing Amy (1997), Smith’s comedy drama which won two independent Spirit awards: Best Screenplay and Best Supporting Role (for Jason Lee). Around the time that Chasing Amy (1997) was wrapping, Smith broke up with Adams and, then when the Spirit awards were approaching, he met his soon-to-be wife, Jennifer Schwalbach Smith. After Chasing Amy (1997), Smith started on Dogma (1999), a controversial film about Christianity. Around this time, Smith’s wife gave birth to their first baby girl, Harley Quinn Smith. Harley Quinn and Jennifer both have roles in Smith’s next film,Jay and Silent Bob Strike Back (2001). In this road trip comedy, the cult heroes, Jay and Silent Bob, go on an adventure to stop the production of a movie being made about them, find true love, and save an orangutan.

In 2004, he wrote and directed Jersey Girl (2004), starring Ben Affleck and Liv Tyler. Although there were some disappointing reviews and the movie was a disappointment at the box office, Smith says it did alright going up against the “Bennifer Massacre” known asGigli (2003).

In 2005, Smith wrote the screenplay for Clerks II (2006), which he planned to start shooting in January of 2005. But then he got a call from Susannah Grant, who wanted Smith to audition for her new film. Smith went into the audition and, five minutes after finishing, he got a call saying he got the part. Filming began in January 2005 so Smith had to delay the filming of Clerks II (2006). After Catch and Release (2006) finished filming, Smith shot “Clerks II” in September 2005. After cutting “Clerks II”, they submitted it to the Cannes film festival. It got accepted and, at Cannes, it got an 8 minute standing ovation.

In 2006, Smith also got offered a part in the fourth “Die Hard” film, Live Free or Die Hard(2007). Smith got to film a scene with one of his idols, Bruce Willis, the scene was supposed to take one day of filming, it ended up taking a week. In 2007, Smith was also hired to direct the pilot for the show Reaper (2007), which garnered favorable reviews.

Smith was offered the chance to direct a film which was written by Robb Cullen and Mark Cullen called Cop Out (2010). Smith accepted, it would be two firsts; the first feature Smith has directed but not written and the first feature of Smith’s that Scott Mosier has not produced (Mosier is trying to find a film to direct). Smith hired Bruce Willis for the film.