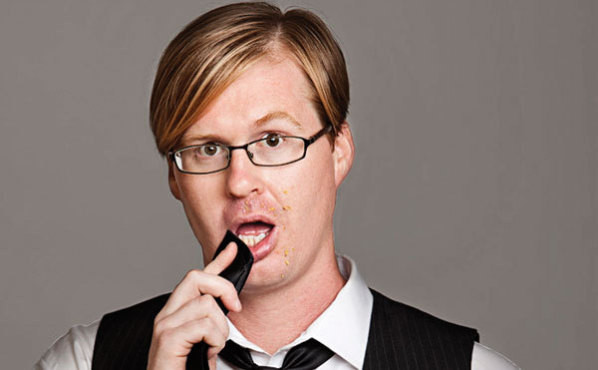 Kurt Braunohler is an “adult” male comedian, who enjoys skywriting jokes in the sky and altering greeting cards.

Kurt was recently named one of Variety’s “Top 10 Comics to Watch” as well as Time Out NY’s “50 Funniest New Yorkers”. He was even named another “Comic to Watch” by Comedy Central and the New York Comedy Festival.

Kurt has been seen (or heard) on TV on Bob’s Burgers (FOX), Chelsea Lately, Delocated (Adult Swim), John Oliver’s NY Stand Up Show, The Heart She Holler (Adult Swim), Comedy Central Presents, Jon Benjamin Has a Van (Comedy Central), Assy McGee (Adult Swim), Human Giant (MTV) and the anti-game show he hosts, BUNK! on IFC. He can also be heard on the radio on This American Life.

His debut album, “How Do I Land?” will come out on Kill Rock Stars Records in the summer of 2013.

Kurt co-created a pilot for Channel 4 in the UK with Kristen Schaal, for their popular web-series, Penelope: Princess of Pets. The duo also have hosted the NYC staple variety show, Hot Tub, for the past 7 years, now in LA.

Kurt also hosts the monthly late night talk show, Night of the Living with Kurt Braunohler, with past guests including Zach Galifianakis, Ted Leo, and Jon Glaser. Kurt holds the World Record for leading the most people in an all-meow version of “Lean on Me” (it’s 117 people.)