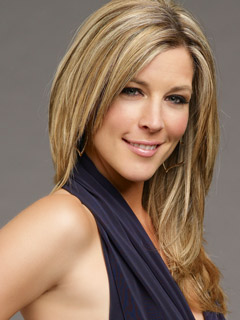 Laura Wright joined the cast of General Hospital in November 2005 as Carly Corinthos.

Born September 11th in Washington D.C. and raised Clinton MD, Laura Wright was hit by the acting bug in the eighth grade. Wright performed in many high school plays such as Gypsy, Our Town, and You Can’t Take It With You. She also has a director’s credit for the production of Father Says No. In addition, Wright has few local commercials and numerous fashion shows under her belt.

After being persuaded to audition for the daytime drama Loving, Wright seriously considered a career in acting and as luck would have it, she was cast of in the ABC Daytime drama Loving and later went on to play the role of Ally Rescott for four years and later its spin-off The City.

Wright debuted on Guiding Light in August of 1997. There for eight years, she played the role of ex-stripper, Cassie Layne. This street smart character won Wright a 1998 Soap Opera Digest Award for Best New Character. In the same year, she was named one of TV Guide’s rising stars in daytime.

Wright resides in Santa Ynez with her husband John and their two children, daughter Lauren Elizabeth and son John Michael. In her free time, she enjoys spending time with her family and friends. Wright has recently dived head-first into the wine business with husband John and currently have their own winery in Buellton, California.

Toward the end of 2009, Wright inked a new deal with General Hospital that will have her tearing up Port Charles as Carly for four more awesome years.

In 2011, after nearly 20 years in Daytime, Wright received her first Daytime Emmy nomination (and later win) for Outstanding Lead Actress in a Drama Series for her portrayal of Carly Corinthos Jacks on General Hospital. Wright was nominated in the same category again in 2012. Some parts courtesy of abc.com