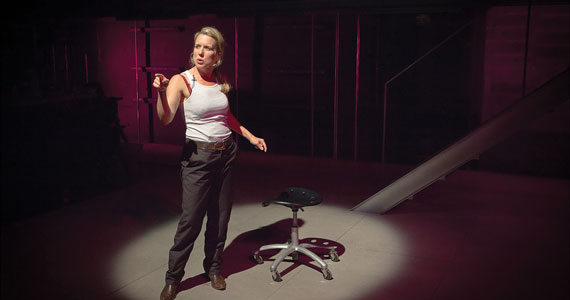 Lauren Weedman is a comedic actress, playwright and author. Her other works include Rash, which premiered at The Empty Space Theater in Seattle and was awarded Best New Play and Best Solo Performance by The Seattle Times’ Footlight Awards; Wreckage, which was selected for The NOW Theatre Festival at the REDCAT Theatre at The Disney Music Hall; and Homecoming, which began as a 15-minute performance art piece and grew into a full-length show that ultimately toured with the Seattle Repertory Theatre and was featured at HBO’s U.S. Comedy Arts Festival in Aspen, Colorado and later New York City. Her television credits include The Daily Show, True Blood, United States of Tara, Reno 911, VH1’s Best Week Ever, Curb Your Enthusiasm, Talk Show with Spike Ferestein and as Horny Patty on HBO’s HUNG. She has also performed with Eddie Griffin in Pryor Offenses, a half-hour pilot for Showtime based on Richard Pryor’s life, and a pilot for Oxygen based on her web episodes Our Bodies, Myself. Film credits include Imagine That and Date Night and is currently shooting Judd Apatows “A Five Year Engagement” starring Jason Segal. Weedman’s first book, A Woman Trapped in a Woman’s Body: (Tales from a Life of Cringe), is a collection of comedic essays and was developed by Weedman into a pilot for The Fox Network. Bust was voted Best of the Arts by The Seattle Times, Seattle Magazine and Boise Weekly. She received the Alpert Award in the Arts for Playwriting for Bust. She continues to develop her show, Family Values (aka NO…YOU SHUTUP), that was originially commissioned by Boise Contemporary Theater and featured as a part of Los Angeles’s REDCAT Theater New Works festival. Weedman currently lives in Santa Monica by the Baja Fresh.