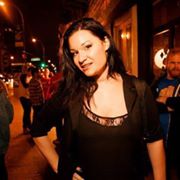 Lauryn Petrie is a reformed drug addict, ex-stripper, college drop out and stand-up  comedian. Originally from Austin TX, she started doing stand up in Portland, OR and  somehow avoided cardigans and becoming a pretentious vegan bicyclist. Lauryn  recently moved to the New York area, where she co-produces the monthly  “SMUT”showcase at The Stand Comedy Club in Manhattan. (Currently “SMUT” is on  hiatus until it gets warmer outside.) In 2014 Lauryn appeared and co-hosted on the  Derek and Romaine SiriusXM Radio show, appeared at the Cape Fear Comedy  Festival in Wilmington, NC, The Accidental Comedy Festival in Cleveland, OH, on  “Comedy As A Second Language” at Kabin in NY, and on “Frantic” at The Stand in  NY.

In her short time in comedy she has toured the country and recently performed alongside Dave Attell, Ari Shaffir, Christian Finnegan, Nick DiPaolo and Kurt Metzger. She has also opened for national touring headliners, such as: Big Jay Oakerson, Laurie Kilmartin, Sean Rouse, Rebecca Corry, Kristine Levine, and Sam Tripoli. Lauryn has also been featured in the SXSW Festival and on TNT. http://laurynpetrie.com