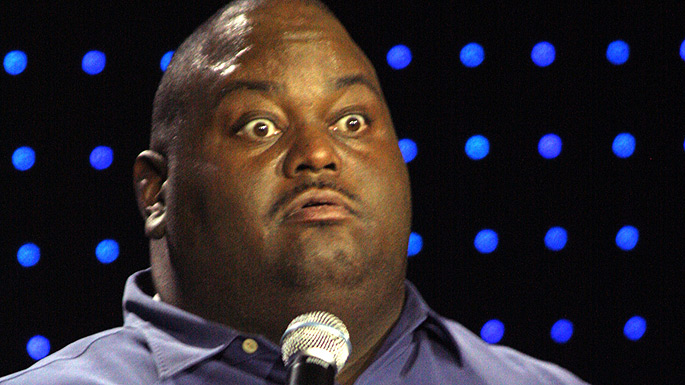 Comedian Lavell Crawford is quickly climbing the comedic ranks and becoming one of the hottest stars in the biz today. He recently filmed a new one-hour special in his home town of St. Louis, scheduled to premiere on Comedy Central on August 12, 2011. “Can A Brother Get Some Love?” will be released on DVD on August 16th, from Entertainment One. In addition, he recently filmed an episode of “Workaholics” for Comedy Central and he’s been cast in a recurring role on the new season of AMC’s Emmy Award-winning “Breaking Bad.” If that’s not enough, he can also be seen as a regular panelist on E! Entertainment’s “Chelsea Lately” and he’s a regular on “Lopez Tonight,” performing in various comedy sketches on the show. From his numerous television appearances and as one of the hottest touring acts in the country, audiences are becoming increasingly familiar with Lavell’s giant-sized talent.

In addition, Lavell has appeared in the films “Baby’s Mama Drama,” “Beverlyhood,” “Ghetto South Problems,” and on the televised series “The Jamie Foxx Show.” On stage, he played Ben in the hit play “Men Cry in the Dark,” based on the Michael Baisden best seller. Lavell also recently appeared on stage with the critically acclaimed production “Friends and Lovers,” a stage production based on the novel by author Eric Jerome Dickey where he played the scene-stealing Bobby. The play also featured notable actors such as Miguel Nunez (“Juwana Man”), Leon (“The Five Heartbeats”), Monica Calhoun (“The Best Man”), Mel Jackson (“Soul Food”) and Maia Campbell (“In the House”).

Endeared by audiences far and wide, Lavell has built a very strong fan base playing theatres, comedy clubs and colleges across the nation in addition to festivals including HBO’s US Comedy Arts Festival, The Comedy Festival and LAFFAPALOOZA, America’s longest-running annual urban comedy festival.