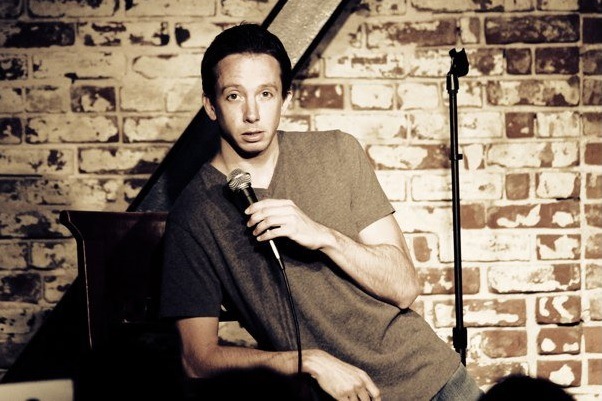 Mark Serritella grew up in Albany, NY to blue-collar hard working people. In the fifth year of his existence his parents were divorced so he started the back and forth bags packed life-style of many American kids. One night while up alone and sick at seven-years old, Mark saw Saturday Night Live and knew immediately this would be the career he would pursue. Unfortunately, he was too young to work unless he wanted to jump into the tragic “child star” role. Like many blue-collar kids, education was seen as the way to upward mobility, so he did very well at school. This is also where he began to hone his act using wise-cracks to get thrown out of class and win over new friends. In one sixth grade poll, Mark was voted second most popular, and not because of his grace on the football field, but because of the aforementioned ability to “steal the show” in class.

Sports biographies, history and joke books were his favorite things to read. During his father’s card games with his buddies, Mark would listen to all the jokes they would tell and would frequently show up with his books to read some jokes to his father’s friends. They would laugh, hand him a dollar and tell him to go away. Mark’s comedy career had begun. Mark would often day dream about his first time on stage and continued his comedy research by watching comedians like Dave Chapelle, Eddie Murphy, Chris Farley, David Spade, Adam Sandler, Bill Cosby, Jerry Seinfeld, Bill Maher, and Richard Pryor. Nothing in his house-hold was censored and every topic was fair game, and his father allowed him to watch any comedian he wanted as long as he could watch too.

Mark continued his education and love for comedy and left Albany, NY after high school for the University of North Carolina. There he sharpened his love for social commentary and comedy by majoring in History and taking as many drama classes as possible. During his first acting class, he found it easy to make his fellow students laugh, and he knew as soon as he graduated the History degree would be “shelved”, while he pursued Stand up Comedy.

Mark moved to California with $187.50, no car and one friend. He immediately began to write an act while sitting by the pool. It was a “soul searching” time for Mark and six months later he stepped on stage at The World Famous Comedy Store.

“Coming up, it’s his first time on stage! Welcome Mark Serritello!” (The emcees frequently mispronounced his Italian last name for the first six months.) As luck would have it, Mark had 6 childhood friends from New York visiting and they watched in disbelief as Mark got two laughs, a few applause and a couple of hecklers in three minutes. It felt like the whole world was moving in a “slow fast motion”. Yes somehow both at the same time. The first set ended and a career began.

Mark loves to write and since his first time on stage has written over 3,300 jokes covering every topic known to man. His tales include hilarious “run-ins” with the eccentric people inhabiting the earth today to dating, girls, his current girlfriend, college, classes, odd jobs, traveling, energy drinks, video games, computers, animals, teaching, politics, news, and all the inner thoughts that make him a comedian.

Since his first time on stage, Mark has been made a regular at the Comedy Store, The Improv, the Ice House in Pasadena, and has the graced the stage in almost every major city across the country from New York, Boston, Houston, Seattle, Detroit, Phoenix, Los Angeles, San Diego, and Minneapolis.

Mark has also released three CDs entitled “Mark Serritella for President 2020″, “History of the Future” and “Live Life with Passion”. He has been part of the Boston Comedy Festival four times, the Seattle Comedy Competition, the Laugh is Hope Comedy Festival (which follows the Super Bowl from city-to-city), the Heirs of Lenny Bruce Festival, and can be seen on Sprint’s Comedy Time TV. He was also part of Dat Phan’s 2006 College Tour, which hit major colleges such as the University of Minnesota, Bucknell University, Wayne State University, and UC Irvine. Mark can be also be seen at LA’s top comedy clubs such as the Improv, The Laugh Factory, The Comedy Store.

Comedy Central just informed him he’s one of the finalists in their national “Open Mic Fight” competition, which will take plac this summer!

People love his quirky sense of humor and his uniquely written jokes that always seem to be on the cutting-edge of comedy. His act has things you’ve thought before and things you never thought you would never think before, which must come from the back corner of his brain. His live show is tremendous and young people love the new style he brings to the table. People after a show commonly say he is a mix between Jerry Seinfeld and Dave Chappelle, a statement which he finds flattering and inspires him as he travels to your town.