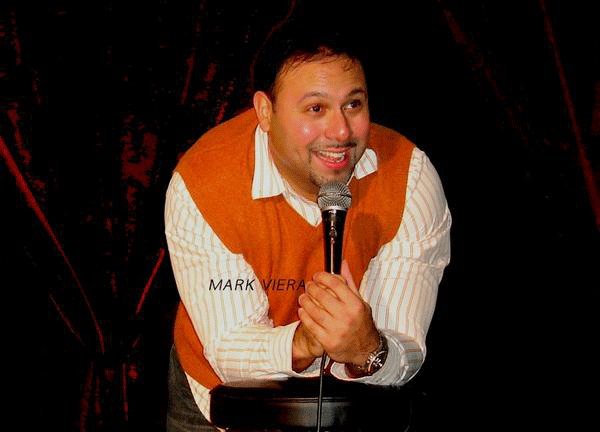 Bronx native Mark Viera became fascinated with comedy, the art he would one day master, very early on.

While his mom spent countless hours as a social worker to provide for her family, Mark and his older brother would pass the time after school watching the popular T-V shows of the 70’s and 80’s. Mark became so engaged in the performances of his favorite comic personalities, it didn’t take long before he began to emulate the characters he came to love. On any given night, he would entertain his family with his remarkably accurate portrayals from shows like Carol Burnett, Sanford and Son and Three’s Company.

Today Mark has honed his talent to craft his own unique, creative style of comedy. His performances reflect his lighthearted, fun-loving approach to entertaining, and his uncanny knack

for seeing humor in even the most ordinary situations. His manner is so real and engaging, just about everyone can relate to his experiences. Whether he’s talking about his beloved grandparents, doing one of his dead-on impressions or just talking about his life growing up in the Bronx, Mark takes his audience on a hilarious, heartfelt journey, finding enjoyment in the absurdities of life!

Mark is loyal to his New York roots, performing regularly at top comedy clubs throughout the city, while also headlining at Colleges and Universities across the U.S. Recently, he’s secured a coveted role as a featured comic on the critically acclaimed “Martin Lawrence Presents 1st Amendment Stand Up”. Mark’s also taken aim at the “small screen” with a network television debut on NBC’s Emmy Award winning show “30 Rock”.

Mark’s reputation as a comic trailblazer earned him the opportunity of a lifetime; a leading position with the hottest, most recognized and highly sought after comedy group in the U.S. The Latin Prince is a member of the “Top Dogs of Comedy”, rounding out a company of notable performers that includes Capone, Rob Stapleton, Corey Holcomb, and Wil Sylvince.