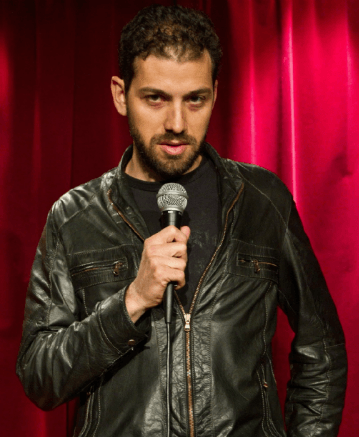 Matt Nagin is a highly innovative comedian and actor. As a standup, he performed on The Dr. Steve Show (WPIX), on APTV where he was a presenter for The Winter Film Awards, and at The Edinburgh Comedy Festival. As an actor he has been featured on A&E, Investigation Discovery, The Travel Channel, CNN, Animal Planet, National Geographic, and new reality shows on TLC and Lifetime.

Matt’s rants and social commentary appear regularly on The Audio Henchmen Podcast as well as on The Ed Tyll Show on Big810AM. Other recent acting work includes playing the lead in a time travel movie called Off The Loop, a featured role in a new web series, Yo Taxi!, and a critical role in a sitcom pilot that appeared at The Williamsburg Film Festival.

You can catch Matt performing in the NYC area at venues such as Broadway Comedy Club, Gotham Comedy Club, Eastville Comedy Club, and Tribeca Comedy Lounge. He also produces the monthly showcase Matt Nagin Presents at major clubs throughout the city. This August Matt performed his one man standup show, Woolly Mammoth Panic Attack, at 59E59 Theaters where it sold as part of The East to Edinburgh Festival. The performances in Scotland were a terrific success, with critics awarding his show four stars and deeming it “brilliantly irreverent” and “gloriously filthy.”

Matt has obtained press in The New York Post, Stagebuddy, The NY Press, The Jewish Chronicle, NY.Theater.Com and more. Additionally, he is an experienced writer with an extensive publication history. He recently published short humor pieces in The Higgs Weldon and Points In Case, and he’s published articles and fiction in such markets as The Humor Times, Policy Mic, The New York Post and Grain Magazine.

Matt currently serves as a Talent and Show Coordinator for The Gotham Comedy Foundation. With the help of GCF founder Bill Drewes, and Gotham Club Owner and C.E.O. of the GCF, Chris Mazzilli, Matt produces and hosts comedy shows at cancer centers and senior homes.