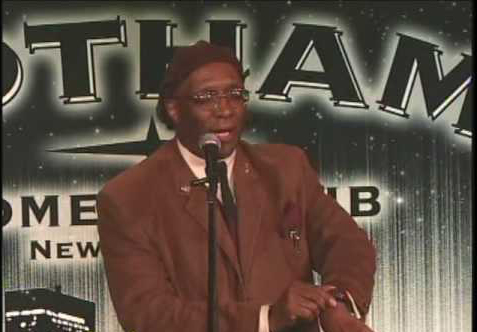 Melvin George – “The King of Smooth!” Tall, lean, bespectacled and armed with a brazen sense of “cool.” Melvin made his comedy debut in his hometown of Boston. In 1975 he moved to New York City where he quickly became successful. A trained actor and director, Melvin used his theatrical training as a member of “The Kitchen Table Comedy Team” in New York making appearances at Carnegie Hall, The Village Gate and on several local T.V. shows. Melvin has appeared in concert with such celebrated artists as Chaka Khan, Gladys Knight and the Pips, Roberta Flack, Patti LaBelle, The Commodores, The Temptations, and The Four Tops. Melvin’s successful showcase at the National Association for Campus Activities’ Southeast regional conference resulted in over 60 college dates, netting him a coveted showcase spot at the 1989 National NACA Convention in Nashville. In 1990 he was nominated for National Campus Entertainment Award for comedy. He has been seen in the films “Mo’ Better Blues” and “Meteor Man”. Melvin also appeared on Fox’s “Comic Strip Live”, A & E’s” An Evening at the Improv”, “Caroline’s Comedy Hour”, and HBO’s “Def Comedy Jam”