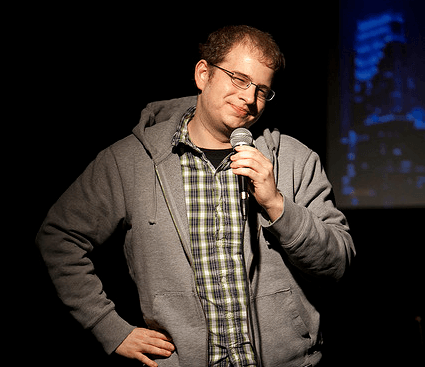 Mike Drucker started doing comedy on a rainy February afternoon after spending months recording himself in his sad little NYU dorm. Not being as terrible as he thought, he continued to hit open-mics and was soon a regular at clubs around New York City. Within a year, he was performing at colleges and national comedy competitions, and was a finalist in Disney’s “So You Think You’re Funny” contest and the runner up for the title of Philadelphia’s Funniest. Since then, he has performed in comedy festivals across the country including the Boston Comedy Festival, Seattle International Comedy Competition, New Orleans Comedy Festival, New York Underground Comedy Festival, and more.

With his sharp jokes and unusual topics, Mike has been lucky enough to write for places including Saturday Night Live, The Onion newspaper, The Onion News Network on Comedy Central, Late Night With Jimmy Fallon, McSweeney’s, Nintendo, College Humor, The ESPY Awards, and the PBS Mark Twain Awards (TBS). His writing on and off television has been featured in Entertainment Weekly, The New York Times, and was nominated for Time Out New York’s Joke of the Year.

He has also appeared on television on ESPN, Comedy Central’s The Watchlist, Saturday Night Live, and a segment on comedy on Inside The NFL.