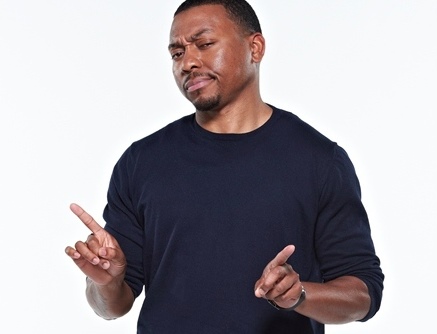 Na’im Lynn the surest thing to come out of Jersey happened way before MTV was even a reality. Blame it on the moon men or some other inter-galactic event, but there’s no denying that the universe was blessed with the descent of Na’im “4000” Lynn, landing in a small town named Hillside, two miles east of Newark Liberty Airport (even then he was so fly he was two miles ahead of the plane!). Nevertheless, it was obvious… A star was born.

Growing up using Martin Lawrence and Eddie Murphy for Muses, it wasn’t long before Na’im developed a knack for out-of-this-world comedy that has him skyrocketing to the top as the next big thing. Best known as the opening act for his friend, famed comedian Kevin Hart, Na’im travels the world over blazing the stage as part of Hart’s non-stop tour that has produced two genius comedic movies – “Seriously Funny” and “Laugh at my Pain,” Na’im also stars in the latter.

“He helped me early,” Na’im said of Hart. He taught me how to be more personal with my jokes. He was like ‘yeah, I don’t care if you bomb, just go up there and try some new s#it!’ Once he fed me that knowledge I took it and ran and I became really good. And from me becoming good, he’s become great, because he has to get up there and follow me.”

And speaking of followers… His thousands of devout friends and followers on Facebook, Twitter and Instagram are privy to his hilarious up-to-the-minute antics and serve as a testing ground for his ever-evolving material – much like his fellow classmates at Temple University who gave him his first standing O as a novice comic on the school’s stage. The then aspiring physical therapist ditched that career and a job at US Airways to pursue his passion. A week after calling it quits with “the friendly skies,” he won a showcase with NBC thus starting a ripple effect that has had him riding a wave of success ever since with spots on Comedy Central, HBO, BET, TV One, UPN, VH1, Jamie Foxx’s “Foxxhole Comedy Series,” and a cast member on the FuelTV show “Master Debaters with Jay Mohr” just to name a few.

Inspired by comedic legends and presently working with some of comedy’s greats, Na’im has no choice but to take his position on the brink of major stardom to achieve his full potential as a comedic dynamo.

“When you follow a lot of comedy you’re gonna develop a sense of humor. You’re gonna find yourself trying to be funny. And I’m intelligent too, so if you can put the two together you’ll have a successful comedian and that’s where I am today” – Na’im Lynn.

Na’im is currently on the “Let Me Explain” Tour. You can get more of Na’im’s story by becoming a fan at Facebook.com/na’imlynn, following him on Twitter @naimthestar, Instagram @NaimLynn and keeping up with him online at Naimgotjokes.com