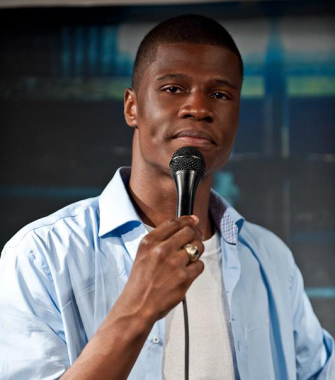 Neko White standup comedian, actor, and writer. Has been actively working the comedy club circuit since he began his career in September 2007. Since that time Neko has written and stared in off-Broadway plays with the epic theater ensemble (Shakespeare Remix: Macbeth and Shakespeare Remix: Othello) featured in a documentary entitled “One Mic”, been the warm-up comedian and Guest writer for MTV2’s Hip Hop Hollywood Squares and performs his brand of stand up in comedy clubs and colleges all over the east coast.

Born May 8th, 1993 and raised in Harlem, New York Neko has been a fan of comedy since age 3. Growing up Neko was always the “funniest kid in school” that was his identity. It was when Neko entered High school that he met someone socially funnier than he. Now faced with two options One, lose the identity he always had of being the funniest kid in school or two, carve out a lane for himself that was all his own. That was when the then 14-year-old high school freshman began telling jokes to his classmates. After 6 months a teacher suggested Neko go to an Open Mic at a local comedy club. The rest, as they say, is history. By the time he graduated from High school, Neko was already 4 years in the business with a television credit and working professionals all over New York and the East coast.

Not choosing the college life Neko is a Full-Time Comedian. Building a name for himself through his performances. When Neko is onstage he spares no target. Including himself. Often saying “Before I talk about anyone let me talk about myself.” A knack for social commentary, personal reflection, and in the moment reactions audiences get to know this young man as he lets them into “his world.”

What is Neko working on these days? Well, he always says “there is not enough of my face on tv” and he is looking to change that. Most pressing though Neko is going around working material for his first comedy album “Neko White: Introducing Me.” which is set to be recorded and released in 2014.