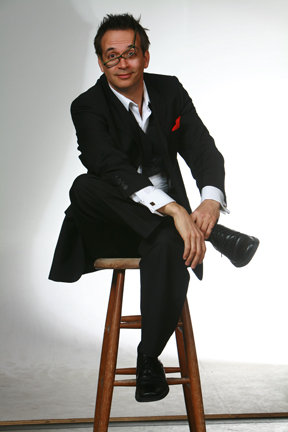 Pete George audiences have never seen anything like an exhaustingly funny Pete George performance. As he pinballs through his act, he leaves them laughing so hard they can barely catch their breath. His stage antics take us on a journey that includes hard hitting jokes, life stories, cartoon voices and even… yes, Rock and Roll. Mark Stuplin at E! Entertainment Television says, “Pete George is Spastically Funny!” and according to Las Vegas booker Kevin Kearney, “Pete George, in a word…Hilarious! He really is the complete comedy package that you simply must see to believe.”

Perhaps this energizer bunny began developing his off-centered and out-of-step approach to life when he was teased as a child, mistakenly labeled learning disabled and placed in special classes. Just minutes into Pete’s act he leads us to believe that maybe it wasn’t a mistake after all.

Pete got his start in show business as a lead guitarist in a Cleveland based 80’s rock group. “We wanted to be like the band A Flock of Seagulls, so we called ourselves A Peck of Peckers.” Discovering that being funny was his calling, Pete ventured into comedy competitions and a quick string of wins set off a 20-year career that has included over 7,000 shows at a multitude of venues and corporate events, touring the world, headlining comedy clubs, cruise ships, colleges, military shows and special events. “One time I even opened for the Australian Male Stripper Show Thunder From Down Under”, George remembers… “I thought it was a seminar on Irritable Bowel Syndrome.”

No slouch as an actor, Pete has appeared in several major motions pictures, including The Shawshank Redemption and The Majestic as well as appearances on Family Law, Strong Medicine, Night Shift, Comedy at Club 54, Now That’s Comedy and several national commercials.

Music is an integral part of George’s act and he is an accomplished musician. He likes to call himself the “Rock Star of Comedy” but one look at him and we see that he’s anything but…. Stay tuned for an upcoming television show in development based on Pete’s crazy life and be sure to catch his hilarious comedy CD, Comedy You Can Dance To.