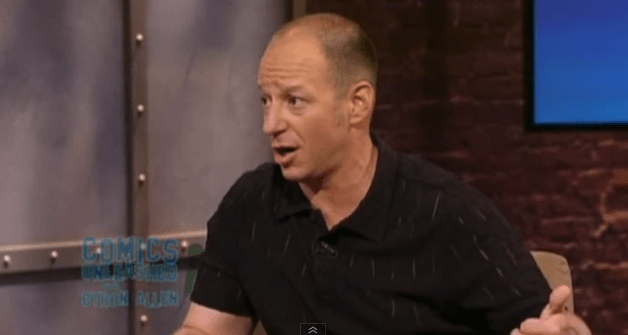 Like most professional comedians, Peter Berman’s first break came when Dr. Timothy Leary caught his act. The guru of hallucinogenic drugs must’ve seen something special in the young University of Michigan student/stand-up comic, because he invited him to play a gig at the Hollywood Improv. Either that, or he was really high. The next summer, after earning his degree in Communications, Peter moved to Los Angeles and quickly became a regular on the stand-up comedy scene.

Early on, Peter wore acid-washed denim on stage and opened for top comics including Tim Allen and Paul Reiser. Today, he appears regularly on The Late, Late Show with Craig Kilborn, has been seen on MTV, VH1, Comedy Central and Star Search (with Arsenio Hall). He also was the guest host on NBC’s Friday Night. Berman also appeared on Comedy Centrals international television series The World Stands Up, and has won over audiences in England, Ireland, Australia, The Netherlands, and Scotland. He performs roughly 200 road dates a year as a headliner, and is honored to have just safely returned from a series of shows for our troops in Afghanistan.

Peter recently taped his own half hour comedy special, Comedy Central Presents that aired in April, 2006.

Peter was invited to perform at the 2004 Just For Laughs International Comedy Festival in Montreal. He garnered rave reviews and much attention for his performances on The Masters and Best of the Fest shows. Peter recently was the winner of the Los Angeles portion of the Laughs Across America comedy contest, and appeared at the 2004 Las Vegas Comedy Festival.

Branching out into other mediums, Berman was Host and Head Writer of his own nationally syndicated morning radio show, Morning Sickness. He has also contributed material to The Howard Stern Radio Program. Peter was also a creator and producer of the HA Brothers Comedy Tour, which raised thousands of dollars for local charities, police and fire departments, and civic groups.

On a personal level, somehow he was lucky enough to find his beautiful wife, Teresa Apollo, and trick her into marrying him. Before they could even celebrate their first year of marriage they were blessed with their first son Jack, AND and their second dog. A quick scant 2 two years later they, again were blessed, with their second son Miles. A THIRD dog soon followed. Peter looks forward to the day when he will be able to once again sleep in his own bed and have more than the 2 inches of bed space that he is currently afforded. All of this domestic chaos might seem a little overwhelming to some, but for Berman its all a source of material. It is in this place, called life, that he finds inspiration for his comedy. Comedy that really gets to the truth of the matter. A 39 year old, recently married fathers continual coming of age story. While two little boys might seem like a lot of work, they pale in comparison to the three dogs that wont stop barking or running away.

He is developing several shows for TV, including his own sitcom based on his upside-down home life.