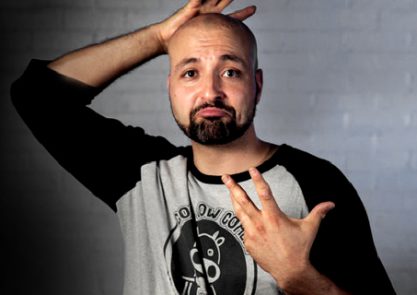 Rahmein Mostafavi not only the creator and host of many of the Cool Cow shows, Rahmein is also a professional comedian himself. A lifetime entertainer and comedy connoisseur, Rahmein is one of the areas only Iranian-American comedians. His original insights on life from that mixed ethnic perspective, as well as his witty observations on family, politics, society, and religion have made him a fast favorite in the metro and surrounding areas. His credits include regular appearances at the Arlington Cinema & Drafthouse, DC Improv, Richmond Funny Bone, and sets at the Warner Theater in DC, and Caroline’s on Broadway. He has shared the stage with some of the best comics in the nation including Tim Meadows (SNL), Joe Matarese, Bob Marley, The Sklar Brothers, Jen Kirkman, Jake Johannsen, Godfrey, Joe Torry, and Maz Jobrani. He has also been featured at some of the biggest comedy festivals in the nation, including Laugh Your Ashville Off and the Cape May Comedy Festival.