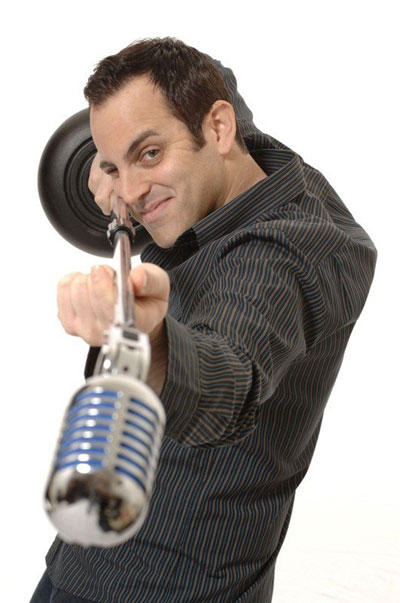 Ray Ellin was honored as one of New York’s “Best Emerging Artists” and “Ten Standout Stand-Ups Worth Watching” by Back Stage magazine, and recently received a Proclamation from the city of New York for his contributions to comedy. He is a comedian, television host, actor, writer and filmmaker.

In addition to LateNet with Ray Ellin, Ray has also been the host and writer of the syndicated television shows The Movie Loft, New York Now, PremiumTV, andBrainFuel TV.

Ray is currently hosting the all-new Gong Show Live, a resurrection of the legendary ‘70s talent competition. He will also be the host of the upcoming game show Worth The Wait.

Known for his ability to ad-lib and improvise with any crowd, Ray has become one of the most sought-after hosts for corporate and charity events. Ray’s ability as a comedic auctioneer has raised hundreds of thousands of dollars for worthwhile causes.

Ray is a featured performer in NYC’s hottest comedy clubs and a regular weekend emcee at the world famous Comic Strip Live. He served as TBS’ emcee at the Las Vegas Comedy Festival. Ray has performed at hundreds of colleges and comedy clubs around the country, and has racked up an impressive list of television credits including appearances on HBO, FOX, VH1, DISCOVERY, ABC, NBC, and England’s Mancs vs. Yanks. Ray was also profiled on Dateline NBC, in which it was discovered that his blood pressure actually drops right before he goes on stage!

Profiling the top three Latin comics in the country, Ray executive produced and directed the film The Latin Legends of Comedy, which was distributed by Twentieth Century Fox.

Ray is the founder of the popular social-networking comedy site DailyComedy.com, the “Youtube for jokes.” He also managed to find time to co-create and produce the animated series La Familia, featuring John Leguizamo, and the Jack Daniel’s Latino Comedy Series, a 13-week comedy event in New York City. The enormously successful program was tapped by other major U.S. cities including Chicago and Miami.

As an actor, Ray has taken on a variety of theater roles. He co-starred in the romantic comedy Killing Cinderella, and produced and co-starred in the short films Yellow, The Try-Out, The Face, and Felix the Painter. He has appeared in several television commercials including spots for Volkswagen, Microsoft, Coca-Cola, Budweiser, and a multi-part campaign for the Sci-Fi Channel.

Ray lives in New York, has two older sisters, has no tolerance for women who don’t eat on dates, and likes Barry Manilow.