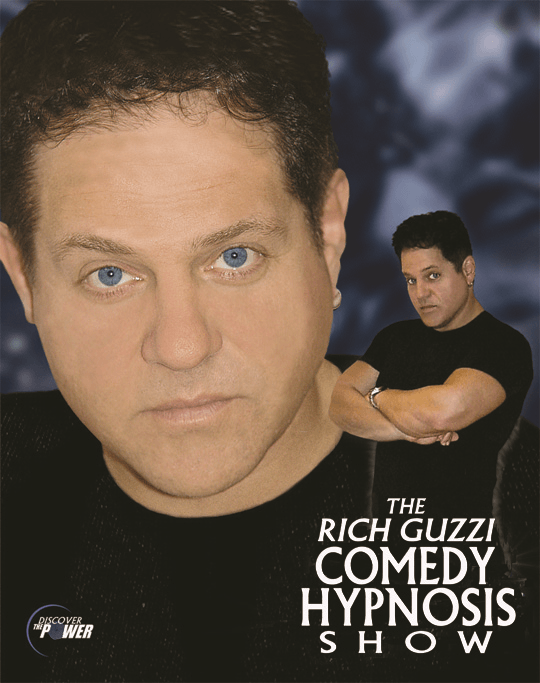 The Rich Guzzi Comedy Hypnosis Show is actually three shows in one because Rich is part standup comic, part master hypnotist and part motivational speaker. He becomes the Swiss army knife of the stage every night as he relentlessly tours the country and cutting the crowd to ribbons.

The show becomes a rock concert when Guzzi invites people from the audience on stage to participate in the hypnosis part of the performance. “It’s not your average comedy show” says Rich “When I did only stand up, the attention was all on me and what I was going to say next, now everyone is focused on their friends on stage. It becomes personal, making it thousands of times more powerful and of course, funny!”

Don’t be misled, Rich Guzzi is still a standup comic and that is what sets his hypnosis show apart from the rest which is quite evident as soon as he hits the stage. Even his preliminary talk about hypnosis hits the funny bone hard and with all the jokes and facial expressions added throughout the show there is no mistaking his comedy roots.

Rich also makes time in his show to bring awareness to the benefits of hypnosis. “In the end, all I really want to do is help people” says Guzzi in his unmistakable New York accent. “I am like a cross between Tony Robbins and Tony Soprano and the show as funny as it is its still only a demonstration of what you can do with this powerful tool.”

The Rich Guzzi Comedy Hypnosis Show is standup comedy, hard-hitting hypnosis show and self-help seminar with some special surprises. Sounds like an offer you can’t refuse.