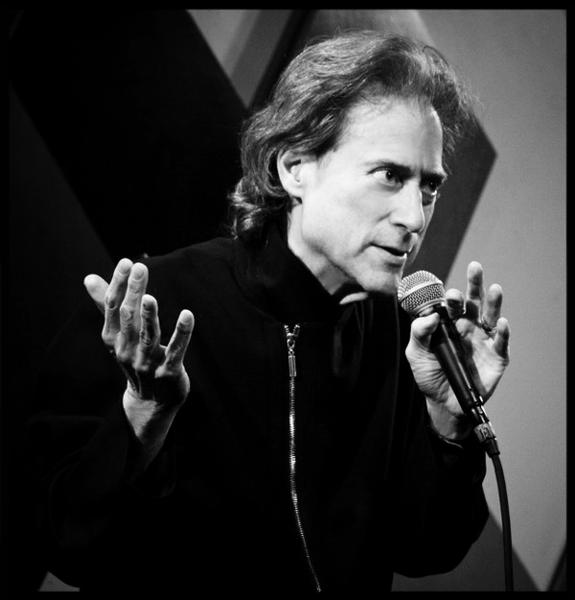 Standup comedians are famous for their neuroses, but Richard Lewis takes anxiety to a new level. On-stage, he energetically frets and overanalyses the most personal aspects of his life and wallows in his low self-esteem until the audience convulses with sympathetic laughter. He was born in Brooklyn, but raised in New Jersey. While attending Ohio State University as a marketing major, Lewis also studied communications. Upon graduation, he worked as the lead copywriter for an advertising agency. Four years into his career, he abandoned it to become a standup comedian, making his club debut in Greenwich Village in 1972. His first break came when he won a regular gig at Budd Friedman’s the Improv comedy club and then debuted on The Tonight Show. Lewis became really well known in 1979 when he co-wrote and starred in Diary of a Young Comic, a show which gained him a cult following. Its success led him to become a television writer. In 1982, he made his first appearance on David Letterman’s late-night talk show and from there embarked upon a three-year cross-country tour. Lewis had great success with his first cable TV special, I’m in Pain, in 1986. His second special, The Richard Lewis I’m Exhausted Concert, earned him a nomination for a Cable ACE award in 1988. Two years later his third special, I’m Doomed, was similarly nominated. He and Jamie Lee Curtis starred in the popular ABC sitcom Anything but Love from 1989 to 1992. In the early ’90s, he took a break from standup. He launched his film career in 1988 with That’s Adequate and continued to occasionally appear in supporting or character roles, notably in the independent film Drunks (1995) in which he won kudos for his dramatic portrayal of an alcoholic junkie. Lewis starred in a short-lived sitcom, Daddy Dearest (1993), and did not again try a television series until he and comic Kevin Nealon co-starred in Hiller and Diller in 1997. His 1995 standup routine “Magical Misery Tour” won considerable kudos and was the basis for a well-received 1996 cable special, shot live from the Bottom Line club in New York. Since 1987, Lewis was actively involved with HBO’s annual Comic Relief benefits, large star-studded comedy shows in which all proceeds go toward helping the homeless. ~ Sandra Brennan, Rovi