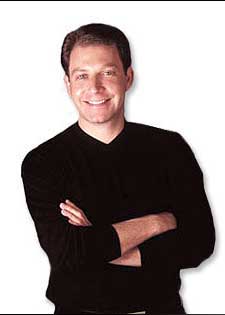 Ricky Kalmon is a stage hypnotist, corporate entertainer, motivational speaker, empowerment coach, TV personality, author and creator of the Subconscious Makeover™ system. Kalmon has broken the stereotypical mold of a hypnotist and has redefined the art of hypnosis.

For over two decades, Kalmon’s hypnosis show has amazed audience around the world. He has made numerous special guest appearances on Fox, FX, E, TV Guide and Comedy Central. Kalmon’s uniqueness comes from the way he combines music, audience participation, and comedy to create an unforgettable show which is unmatched by anyone. It’s a show that will keep you on the edge of your seat and take you on a Vacation of the Mind! A Ricky Kalmon show is more than a comedy show—it’s an experience!™ You can catch one of Ricky’s live shows at casinos, theaters and comedy clubs throughout the country. He is also a special guest entertainer on the Disney Cruise Line.

“Standing Ovations are the rule, not the exception!” Ricky Kalmon brings high-energy, clean, and impressive entertainment to corporate events around the world. Ricky’s programs are a rare combination of hilarity and enlightenment. Walk in prepared to be entertained—but when you leave, you’ll be amazed by the experience. Award winning sports teams have been captivated by Ricky’s performances. Among them are the USC Football Team, the St. Louis Cardinals, and the Arizona Diamondbacks. Having hypnotized and amazed thousands of people, Kalmon is the number one, most requested hypnotist in the country. His show appeals to all demographics.

“Inspired Our Organization!” Riveting, hilarious, and everything in between, Ricky Kalmon delivers programs that will change the way you live, work, and think. His motto, “Change the way you think, and you can change your world” truly reflects the content of his motivational empowerment program. It’s a mind-altering and life-altering experience that has benefitted college and professional sports teams, Fortune 500 companies, and audiences worldwide. Effectively titled “Unlock the Power Within™,” Ricky Kalmon’s programs are inspirational and offer compelling, applicable tools anyone can use in personal and professional development. He reveals how the subconscious mind can be the greatest tool in achieving new heights of reducing stress, productivity and success! This program truly offers individuals a way to invest in themselves.