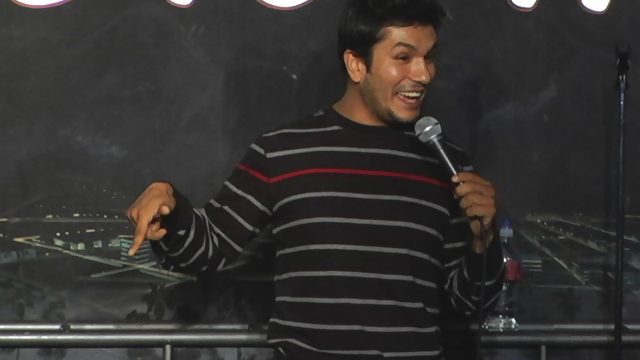 Born in Los Angeles, California with a heritage background of Yaqui Indian, Mexican and Basque, Robert Zapata has garnered a reputation for reaching a universal audience with his off beat humor. Since a very young age Robert was told he was a funny little “dude”.

He started his career at The HAHA Comedy Club located in North Hollywood, California and worked his way into Hollywood’s premiere comedy clubs, The World Famous Improv @ www.improv.com and The World’s Famous Laugh Factory @ www.laughfactory.com. Robert Zapata has performed with celebrity comedians such as Willie Barcena and Paul Rodriguez at the Legends Casino in Yakima Washington. Jon Lovitz, and Arie Spears at The Laugh Factory and Chris Kid Reid, Monique Marvez, and Jeffery Ross at The Hollywood Improv. Robert then went on the road and featured for Wilie Barcena for 2 years, while on tour he developed his first half hour special titled, “Why Are You Acting so Tall?”. He recently shot and produced his special and will the release date is set for February 2013. Look Out for it! Robert’s Is now headlining and already working on his half hour special tittled, “Single, Broken and Infamous”. Make sure you come out to see me live so you can experience the new material. Funny Stuff. Robert has also performed for our troops the Army at Fort Bliss in El Paso Texas and the Marines at camp Foster in Okinawa Japan.

In 2004 he was featured on SiTV’s Inside Joke and The Latino Laugh Festival the show. Also Mun2 Loco Comedy Jam. Soon after Robert booked his first comedy movie titled, Lean LIke a Cholo in which he played Moco. He then soon after booked the movie, “Primos the movie”, which is distributed and you can find on Netflix.com. Amazon.com. Wal-Mart.com.Robert Zapata comedy career has been influenced by the great comedian Eddie Murphy, Paul Rodriguez, Sam Kinison, Rodney Dangerfield, Richard Pryor, Jerry Seinfield, Martin Lawrence, John Luiguizamo and Pablo Francisco, Dane Cook, Jerry Lewis, Lenny Bruce the list goes on… Robert’s zany personality and quirky material comes from observing the absurdities of everyday life. His unique style is very physical. His facial expressions always get the crowd. “Not only do I tell jokes, I can dance, sculpt, I can sing…in the right setting (the underground tunnel in downtown).” His sense of timing is what people have reinforced towards him. “I get this great instant gratification from having people around laugh, and have a great time. It puts me in a good mood…even on a cloudy day.”