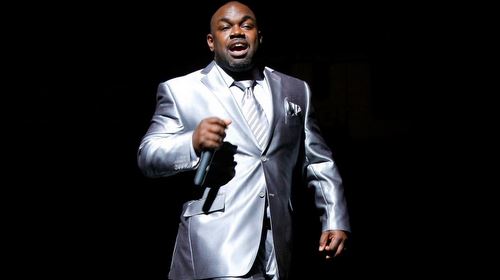 Warm and friendly is how you feel once you greet the welcoming smile of comedian Rodney Perry in person, and after only minutes of being in his presence the smiles turn to hearty laughter as his gift is to entertain. Born in Chicago and raised in Monroe Louisiana, the road to stardom has not always been paved with fun and laughs. But whatever his surroundings Perry has always used comedy to pave his way to success.

Rodney served his country for eight years as a member of the United States Navy. Serving two tours of duty took Rodney to New Orleans and to the Bay Area, which prepared him for the entertainment industry and for life. He would perform his duties as Yeoman Second Class by day and perform his sidesplitting comedy shows by night. Perry came to a crossroad in 1998, when he had to choose between continuing his Navy career or making Stand-Up Comedy a career. He chose the latter. Rodney, his wife and their children packed their things and headed to Hollywood. Actually, Inglewood.

Upon exiting the Navy Perry was thrust into the work force. Comedy was not paying the bills, yet. Perry did it all. Apartment Manager, Secretary, Data Entry Clerk, Temporary Employee for a Modeling Agency and the list goes on and on. He did all the things that a budding young comedian does. Everything, except the Comedy career that he had moved to Los Angeles for. All that changed during a temporary assignment at the Veterans Administration. During his week at the VA Rodney befriended an amputee. One day he asked Perry; “What are you doing here?” and “Why aren’t you doing what you were set on this earth to do?” That was the wake-up call he needed. Rodney began doing any and everything in the world of comedy. He was an audience warm-up, a radio personality, a writer, and mostly a full fledged Professional Stand-Up Comedian.

Rodney Perry has had the opportunity to learn the business of Comedy from some of the best. His first job in Hollywood was serving as writer/warm-up guy for Kym Whitley’s show “Oh Drama” on BET. Doors continued to open for Rodney as he got opportunities to serve as opening for the likes of George Lopez, Cedric the Entertainer, and Steve Harvey. The relationship that would prove to be the most poignant would be the one between Rodney and Mo’Nique.

The first time Rodney ever spoke to Mo’Nique she offered to take his wife on a shopping spree. Rodney says, “That was the day I met my personal angel, my sister”. They would go on to perform all over the country and to share microphones on syndicated radio as well. When the Radio Show ended Mo’Nique told Perry that bigger and better things were coming. That thing happened to be the Mo’Nique Show on BET.

Perry now calls Atlanta home. Rodney Perry’s Comedy career has given him many opportunities, from his work as Co-Host of the Mo’Nique Show to his starring role as Harold in “Tyler Perry’s Madea’s Big Happy Family”. Even though Perry is becoming a sought after actor and host he is and always will be a comedian first. Currently, Rodney Perry is preparing to shoot his first comedy special for television entitled “Rodney Perry All The Way LIVE!”