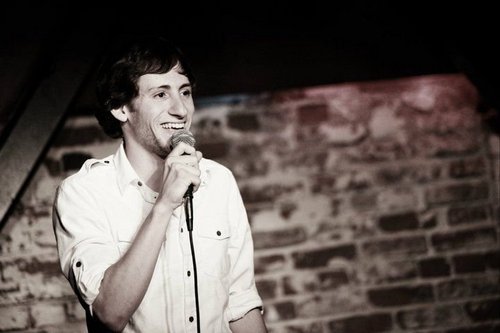 Samuel J Comroe born and raised in the San Fernando Valley of Los Angeles, California, into a family of nine (five sisters, and one brother) Samuel Comroe grew up in a loud, raucous, and fun-loving environment. With such vivacious characters for siblings, it was an environment that forced any shyness out of him right away, and instead created an individual unafraid of being the center-of-attention. In the third grade, after being diagnosed with Tourette syndrome, Comroe suffered his fair share of teases and taunts from peers who didn’t understand his curious condition. Although this affected his self-esteem and confidence throughout his childhood, as he entered high school in a different district (and on the heels of advice from his father that he could be an entirely new person), Comroe made a conscious decision to no longer let bullying affect him, rather laugh along with the bullies. For example, on his first day as a high school freshman, Sam was being picked on by two intimidating seniors, and instead of backing off he decided to laugh with them. This small act changed the rest of his high school career and led him to his future in stand-up comedy. He saw how much more respect he got from just having fun with himself.

During his junior year at Canoga Park High School Samuel joined play production and began acting in school productions, taking leads in shows such as “Arsenic and Old Lace”, “Grease”, “The Odd Couple”, and performing in various acting competitions. His love and joy that stemmed from entertaining audiences led him to see that he could parlay his natural ability to make others laugh into an actual career. So, during his junior year, with the approval of the school administration, Comroe began performing stand-up in the school auditorium during lunch, charging fifty-cents for admission and donating all proceeds to his class. As Comroe states, “the pure excitement and joy of performing is all I need.” Sam continued performing half-hour lunch shows throughout his junior and senior years of high school.

After graduation Sam went to community college for two semesters before deciding that he wanted to pursue stand-up comedy as a real career. Additionally, Comroe continued acting in plays with lead roles at Pierce College’s community theatre and with Zombie Joe’s Underground Theatre in North Hollywood. At the same time, he began going to the third street promenade at Santa Monica and performed his comedy on the streets for tips, as well as going to open mic auditions all over Los Angeles. It was during this time in his stand-up career that Sam cultivated his unique brand of observational and self-deprecating humor, focusing on his life with Tourette Syndrome.

Since then, Samuel Comroe has gained management and become a House Regular at Flappers Comedy Club in Burbank.  He is also a regular at comedy clubs around Los Angeles, such as The Ice House, and the Improv.  He has also started gaining more recognition outside of Los Angeles, traveling regularly to perform his comedy at venues all over the nation. He has won numerous comedy competitions, most recently placing in the top eight out of one-hundred and one comics at the World Series of Comedy in Las Vegas, and becoming a Top Ten Finalist in the NBC Stand-Up for Diversity showcase.  He is now opening for comedians such as Joey Medina, Tom Green, Gallagher, Don Friesen and James P Connolly, just to name a few.  He is one of the most energetic, engaging and friendly up and coming comedians.