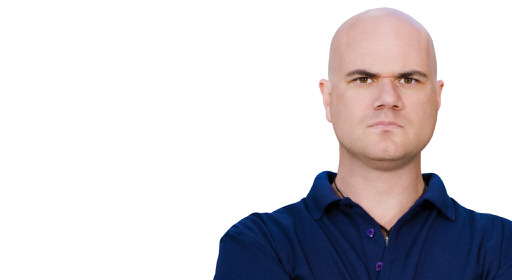 Sean is the star of the hit TRU TV show Storage Hunters, which is now in its second season. His other television credits include commercials and informercials. And if he had just been born a few years sooner, he probably would have been the star of Blossom.

Sean Kelly’s stage presence and energy are hard to contain, and to explain. It’s kind of like watching a latch key child who has a month’s supply of sugar and only 5 minutes to completely destroy his parents’ trailer. His stand-up is filled with unique influences such as growing up as an American kid in Germany (the land where a comedy club is something you beat a person with until they laugh), to spending his teenage years in Italy (the land where they love to cook and eat), to serving an army combat tour in Iraq (the land where they love to cook and eat Americans), to spending time in over 50 other countries around the world (some of which have bathrooms). Another big influence is Sean’s wife Lori, to whom he has been married for 19 years, as well as the rest of his dysfunctional, yet loving and mildly retarded, family. Out of these influences and life experiences Sean has created a large, rich cast of characters that bring energy and life to his hilarious stories as he performs them on stage. His characters also bring the occasional death threat. Sean’s comedy was described by The San Diego Union Tribuneas “High energy and hilarious, San Diego’s rising star of comedy.”

When he isn’t headlining comedy clubs, Sean is taking his RV into the shop for repairs. And when he isn’t doing that, he’s working with some of the nation’s best known performers. Some of the headliners Sean has worked with include Dennis Miller,Bob Saget, Julio Iglesias, Weird Al Yankovic, Bill Burr, Norm MacDonald, Tommy Davidson,Ahmed Ahmed, Mas Jobrani, Mike Marino, Dat Phan, Ralphie May,Sam Tripoli, and Richard Jeni. He has been booked numerous times byLive Nation, House of Blues,Nederlander, The Comedy Store, Harrah’s Casino, many Indian casinos and a few Mexican casinos, and he has had guest sets at the Hollywood Improv, Irvine Improv,Ontario Improv and Jon Lovitz Comedy Club at Universal Studios. He has also made fun of a van full of tourists in broad daylight.