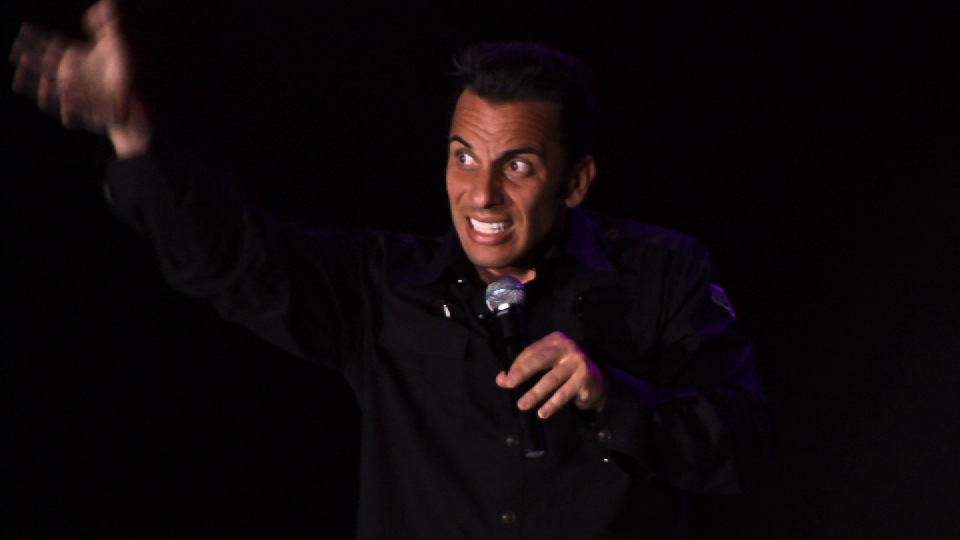 What’s Wrong With People? asks Sebastian Maniscalco in his hilarious new hit stand-up special airing on Showtime and available on DVD nationwide on March 27th. In What’s Wrong with People, he brings his witheringly sarcastic and exasperated take on modern behavior and decorum, trying to bridge the gap between the Italian-American Old World he grew up in and the contemporary frenetic world we all live in today. The result is an original, highly relatable stand-up comedy tour-de-force that has Sebastian performing sold-out concerts worldwide. His self-deprecating comedy reminds fans of a young Jerry Seinfeld who constantly challenges his audience to recognize the absurdities of everyday life.

A native of Chicago, Sebastian grew up with comedy in his blood. After earning a degree in Corporate Organizational Communications from Northern Illinois University , he realized his passion for stand-up comedy and immediately headed out to Los Angeles . While working as a waiter at a Four Seasons in Beverly Hills , Sebastian spent every free night performing at local clubs, bowling alleys and bars. He remembers being so bad during his first stand-up act that the audience jeered him off the stage by screaming, “Sandman! Sandman!” in reference to Showtime at the Apollo’s Howard Sims who would usher failed acts offstage with a shepherd’s crook. But, with a steadfast work ethic and impeccable comedic timing, Sebastian has risen through the ranks to become one of the most respected entertainers in the stand-up community today.

As his career roll continued, Sebastian catapulted into the national spotlight with a 20-city tour for his one-hour Comedy Central DVD Special Sebastian Live! On The Tonight Show with Jay Leno, Sebastian has appeared as the unforgettable style correspondent providing hilarious grooming advice to unsuspecting airline passengers and churchgoers. His other national television appearances include the award-winning series The Savages, The Late, Late Show with Craig Ferguson, Lopez Tonight, Tim Meadows’ The Very Funny Show, Comedy Central’s Premium Blend, Showtime’s Comics without Boarders, Comics Unleashed and Hollywood Uncensored. He is also a popular guest on such ground-breaking podcasts as WTF with Marc Maron.

While perfecting his routine on the stand-up circuit, Sebastian captured the attention of award-winning actor and entertainer Vince Vaughn who selected him to be one of the four featured comedians in the critically acclaimed film Vince Vaughn’s Wild West Comedy Show. “Performing with Vince every night for a month was the best time of my life,” Sebastian recalls. With hilarious appearances from other renowned comedians: Justin Long, Jon Favreau, Dwight Yoakam and Keir O’Donnell, the film became an instant cult success.

Throughout his diverse career, Sebastian has worked with many other entertainment legends including Prince, BB King, Al Green, Anita Baker, and Gladys Knight. In 2009, Sebastian completed an international USO tour for the troops where he performed in Guam, Fuji , Misawa, Iwakuni and Hiroshima . His sold-out shows at the Dubai Comedy Festival and Lebanon ’s Music Hall have solidified him as an international sensation.

Sebastian currently resides in Los Angeles where he can be found eating plates of pasta at Maggianos and working out new material at the Comedy Store on Sunset Boulevard. In his spare time, Sebastian enjoys traveling, golf, cooking and fashion. He is active in various charities benefiting The Foundation for Fighting Blindness and Hurricane Katrina.