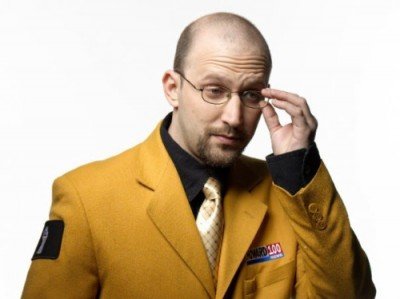 It’s a long way from Sin City to the Big Apple, but one simple phone call transported a then-regional comic named Shuli (one word like Madonna and Cher) to the national spotlight.

Born in Israel and raised in the hell-on-Earth known as the Los Angeles Valley, Shuli Egar began listening to the world’s greatest radio program, The Howard Stern Show, in middle school and told his father one day he’d work for the King of All Media. Not exactly the kind of career path a dad wants to hear from his 12-year-old boy.

After a minor pit stop in Arizona, Shuli packed his things and headed to Las Vegas to begin his comedy crash course. With the help of Sandy Hackett, son of legendary comedian Buddy Hackett, Shuli hit the stage and did what every up-and-coming funnyman does – he bombed. A lot. But Hackett saw something in Shuli and continued to book him for one minute sets at sparsely attended casino showrooms and dive bars.

Competing with free booze and slot machines forced the young comedian to toughen up quick. People go to Vegas to gamble, not to hear unknown stand-ups yell into a microphone over the cash-sucking sounds of coins being flushed down money toilets. It was a rough path, but potential hecklers need to know that whatever half-asssed joke they yell at Shuli today is nothing compared to telling dick jokes to vacationing Midwest families or toothless winos looking to hit it big to pay their rent.

Vegas is the city that never sleeps. The round-the-clock environment helped perpetuate Shuli’s night owl status and found the comedian listening to the live feed of the Stern Show beginning at 3 a.m. This upset his then-girlfriend, who suggested he might as well call the show if he was awake. Shuli took the advice, and like a gift from above, heard the ring of the always-busy Stern phone number on his initial call. Seconds later Stern writer Benjy Bronk answered and Shuli came up with a hypothetical question for Stern: If you died in a car accident, which would you prefer? Authorities finding 500 gay porn tapes or 500 tapes of people eating doodie in your trunk? Stern responded by asking why his entire porn collection had to be in the car. The quick-thinking comedian then came up with a proposition. If he could make Stern laugh with one of his jokes, he would earn the right to sit in on a hand of blackjack when the staff was making its next Vegas trip, which happened to be a few days away. Stern agreed, laughed at the joke, and was side-by-side with Shuli a short while later. Lady Luck came knocking twice for the comedian as he was dealt an 11 and was coerced by Stern and company to double down. What they didn’t know was Shuli was working a lame job at a souvenir shop and brought all the money he had with him – $300. Stern spotted Shuli an extra three bills and won the hand when his 17 beat the dealer’s bust.

Although the Stern staff mispronounced his name Chewli, Shuli became a regular caller for the next year and was highly skeptical when, after seven years of weekly 10-minute phone calls, he received a call asking him to a one-week audition for a secret position. Shuli was convinced the offer was a goof because a year earlier he entered a contest called “Get Johnâ€™s Job” that sought to replace the departing â€œStutteringâ€ John Melendez and placed dead last. But he bought a ticket to New York anyway and told whoever was on the other line that if this was a prank, he’d show up and kick them in the balls.

Shuli soon discovered it was no joke and was brought in as a consultant for the newly-formed Howard 100 News team, a group of journalists whose sole job was to cover any and all Howard Stern news. Shuli was the only non-reporter of the bunch and found ways to stay past his one-week engagement by taking the initiative to produce his own segments and bits. His go-getter attitude landed him a full-time gig, which ballooned into coveted slots on the popular Stern Show roasts, as well as becoming a contributor to the Scott Ferrall Show and co-host of the Sirius Satellite Radio programs The Jay Thomas Show and Miserable Men.

As if contributing to four radio programs wasn’t enough, Shuli hit the road every weekend across the country as part of the Killers of Comedy tour, which featured a rotating cast consisting of Stern Show regulars such as Jim Florentine, Sal “the Stockbroker” Governale, Richard Christy, Yucko the Clown and Beetlejuice. Shuli, clad in his mustard-yellow Howard 100 News jacket, hosted each performance and got crowds amped with his unique and humorous looks at the “dangers” of smoking pot, life as a Jew and the behind-the-scenes antics of the Stern Show.

The Killers of Comedy ended its run, but Shuli is embarking on another trek across America with the Miserable Men Comedy Show starring Shuli and Miserable Men co-hosts Mark Byrnes and Mike Morse. The radio program – currently one of only two live weekend shows on Stern’s two stations – tackles male-related subjects in a no-holds barred approach and the tour promises to do just that and then some.

Now that James Brown is dead, Shuli just might be the hardest working man in show business.