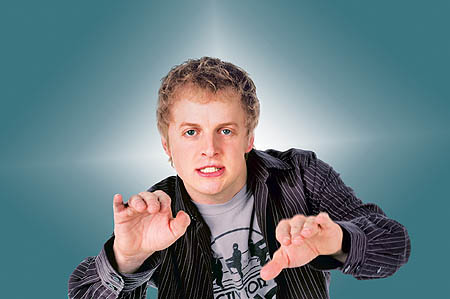 Skyler Stone is an actor, producer, comedian and writer from Kalamazoo, Michigan. He has been on The Late Show w/ Craig Ferguson, Comics Unleashed with Byron Allen, and Comedy Central’s Premium Blend. He has headlined in over 40 cities and 5 different countries and has opened for Jay Mohr, Damon Wayans, Christopher Titus, Dane Cookand Dave Attell. He had his own show on Comedy Central when he was only 25 years old called CON that he wrote, executive produced, and starred in. The show has found a cult following online and bootlegs of it are distributed frequently. In 2007, Skyler wrote, executive produced and starred in a prank show called Skyler’s Revolution for FOX and in the same year he was nominated for an MTV Movie Award for Best Short Film for a short that he directed. With producer Michael Abbott he made a video that went extremely viral called Hands Free Driving about the driving law that went into effect in 2008 in California.

Many top directors have cast Skyler in supporting roles in the last few years (Sir Christopher Guest, the Farrelly Brothers, Michael Bay, and Roger Avary to name a few). He has done guest stars on The Defenders, Rules Of Engagement, The Mentalist, CSI:NY, Dollhouse, Dark Blue, Zeke And Luther, and Lost. He has been the host of two Cartoon Network shows, two MTV shows and hosts his own live comedy show every month in LA at the Hollywood Improv called Skyler Stone & People He Pretends Are His Friends (it is one of their top-selling shows). Most remember him from his role as one of the cooks in the feature Waiting, he played opposite Dane Cook, Ryan Reynolds and Luis Guzman in his kitchen scenes.

Skyler just starred in his first leading role in a film called Housebroken with Danny Devito. He has also just been cast in a hilarious recurring role on Raising Hope for FOX (from My Name Is Earl creator Greg Garcia). It started airing September 21st of 2010 on Fox in the much sought after time-slot after Glee. Skylerstone.com has won several awards for its design and for its innovative use of Skyler’s twisted comedy. He is just wrapped filming a lead role for the horror film Hostel: Part III. He has a dog named Sammy that goes with him everywhere.