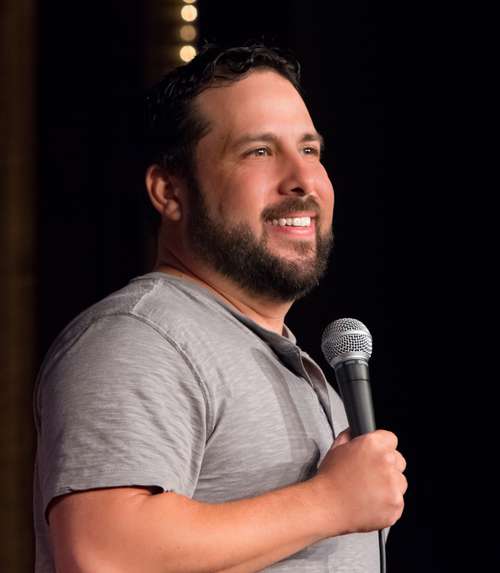 Steve Trevino was born in Gregory-Portland, Texas and got started in stand-up comedy when he told jokes in his 2nd grade talent show.  At a young age he was performing anywhere he could, from backyard barbecues to school functions.  Trevino had his first professional gig in Corpus Christi at the Harbor Playhouse opening for Carlos Mencia at the age of nineteen.

Soon after, Steve was off to Dallas with stars in his eyes in pursuit of his career and got a job as a door man at the Addison Improv in order to garner stage time.   He quickly earned his stripes to become the house MC, opening up for big acts traveling through the club who encouraged him to bite the bullet and move to Los Angeles. His first big road tour came about with the Three Amigos Comedy Tour, featuring Mencia, Pablo Francisco, and the late Freddy Soto, just one of the greats to whom Steve has been compared, a likeness that Steve wears as a badge of honor.   Coming off rave reviews he went on to become one of the youngest comedians ever to headline the Improv Comedy Club and continues to be a top draw.

Steve performed in Spanish on Despierta America on Univsion.  He is a regular doing short sketches and man on the street for the syndicated program American Latino.  He has appeared on The Late Late show with Craig Ferguson, Comedy.TV, Comics Unleashed with Byron Allen, BET Comic View and Que Locos.  He’s become a staple at large events such as the Latino Laugh Festival, New Faces at Just For Laughs in Montreal and the Doghouse Comedy Jam in San Francisco.  Steve was also a writer for and appeared on the Mind Of Mencia.

Recently, Steve was featured in the Laugh Out Loud Comedy Festival along with comic greats Jay Mohr, Rita Rudner, Tommy Chong and Bill Bellamy.  His first hour-long special was filmed during the festival and premiered on Showtime® in October 2012 placing in the Top 20 of the Nielsen Media Research Ratings.  Showtime® raved saying, “Though Trevino may seem as American as any Texan can be, his distinctive stories of finding his way from a Hispanic upbringing in Corpus Christi to living his dream in Hollywood make for a comedy brand that is all his own.”

Steve is currently developing a ½ hour scripted comedy show about his life.  He resides in Los Angeles and performs in venues throughout the country.  He has several tour dates on the calendar, which can be seen on his website stevetrevino.com and is working on his 2nd 1hr comedy special to film in fall of 2013.