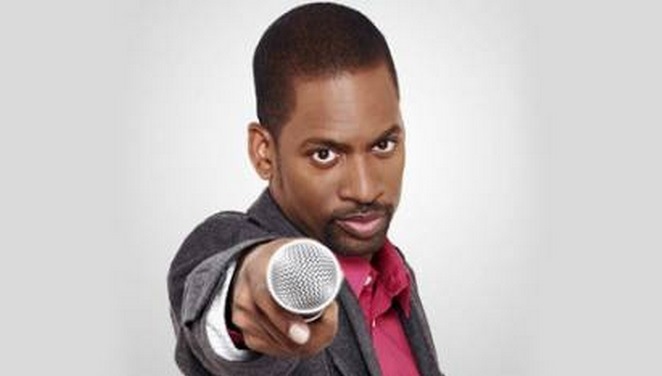 Tony Rock host of the newly revamped legendary talent competition “Apollo Live”, and the recently added series regular on BET’s “Reed Between the Lines,” comedian and actor Tony Rock continues to prove his exceptional star talents. Rock starred in this year’s straight to DVD films “C’mon Man” & “The Redemption of a Dog,” all while still having time to make a cameo in the number one box office film “Think Like a Man,” TV appearances on BET’s “Let’s Stay Together”, VH1’s “Single Ladies,” and co-headlining two separate comedy tours “The Royal Comedy Tour” and “No Sleep Till Brooklyn Tour.”

Born in the same Brooklyn New York Hospital where most of his seven brothers and one sister found their way into the world, Tony Rock, not to be confused with his favorite wrestler, was born laughing. Being the fourth child, of Rose Rock and Julius Rock, Tony had a natural knack for entertaining. Decatur Street in the Bedford-Stuyvesant neighborhood, where he grew up, was one of the toughest that New York had to offer. It also provided a host of rich characters on which to draw. Now residing in Los Angeles, Tony has taken Hollywood by storm.

In June 2003, Tony landed the Jada Pinkett Smith/Will Smith pilot for UPN “All of Us” (2003- 2007) and appeared as a recurring character in the TV hit series “Everybody Hates Chris” (2008-2009). Tony also found comfort on the big screen, playing roles in movies such as Will Smith’s, “Hitch” (2005/I), “Three Can Play That Game” alongside Vivica A. Fox, and “Life Support” with veteran entertainer Queen Latifah. Tony stepped into the role as executive producer on projects such as The Funny Spot (2008) and The Tony Rock Project (2008), both of which he also served as host.

Tony has since then gained a domestic and even international presence; performing in major metropolitan cities and small towns between the east coast, which he represents proudly, and the west coast, where he takes advantage of the Hollywood lifestyle. When in New York, he is a regular at the Gotham Comedy Club, The Comic Strip and the Comedy Cellar and when in Los Angeles, he is a regular at The Comedy Store, The Comedy Union, and headlining at The Laugh Factory.

Outside of the lights-camera-action, Tony works tirelessly as the founder of the MyROCK Diabetes Foundation, a charity organization established in honor of his late father.