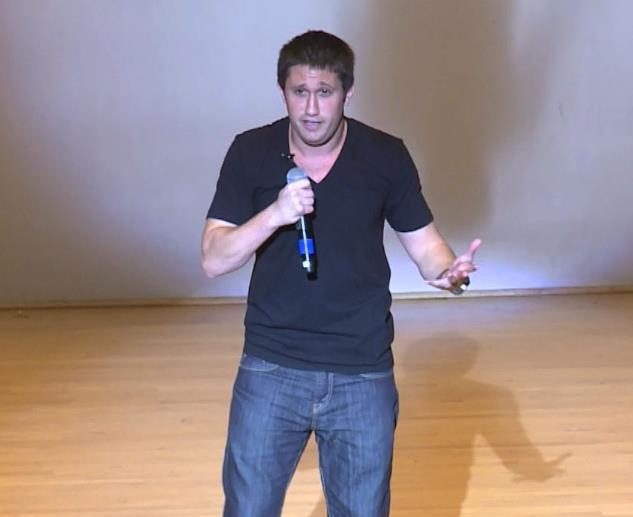 Tyler Gildin is a NYC based Stand Up Comedian and the Editor of Humor at the website Elite Daily. Tyler has headlined Caroline’s On Broadway’s Breakout Artist Comedy Series and has opened up for comedic greats; Damon Wayans, DL Hughley, and most recently Gildbert Gottfried. His 2011 Syracuse Football “Man on the Street” TV Commercials won a 2012 National Silver Telly Award and were broadcasted on SNY and Time Warner Cable.

In 2012, Tyler had the honor of performing at the Santonio Holmes’s charity event: ’2nd Annual Monday Night Party with The New York Jets’. In 2011, Tyler had the privileged of emceeing Syracuse Men’s Basketball’s 2011 Midnight Madness in front of a sold out crowd at the Carrier Dome. Tyler finished in 2nd place in The Jewish Week’s 2012 Funniest Jewish Comedian Competition, was a 2011 finalist for a Shorty Award in the category of Emerging Comedian.

As a native of Long Island, Tyler created the hit YouTube video titled “Nassau (County) State of Mind” that went viral, gaining over 1 million views and landing him an interview on NBC back in 2010. Tyler has been written up and interviewed in various publications including Newsday, CBS New York, AOL Patch, SirusXM Mad Dog Radio and the New York Post. Tyler is Television/Radio/Film Alum of the Newhouse School of Public Communications at Syracuse University. He has written, produced, and starred in various commercials and online-promotional videos for both start-up and established companies. Tyler is a former high school mascot, a legendary camp Color War General, and an oppressed New York sports fan.

“Tyler is a funny, witty, brilliant young man, who truly is a living testament of the American Dream ” – Melissa Gildin

“Tyler is disrespectful, disruptive, and distracts others from learning” – 12th grade report card