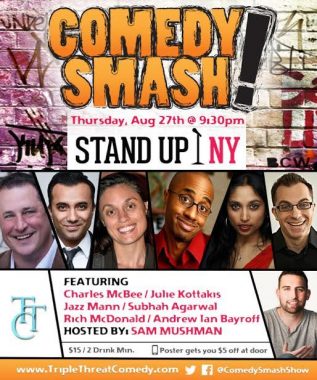 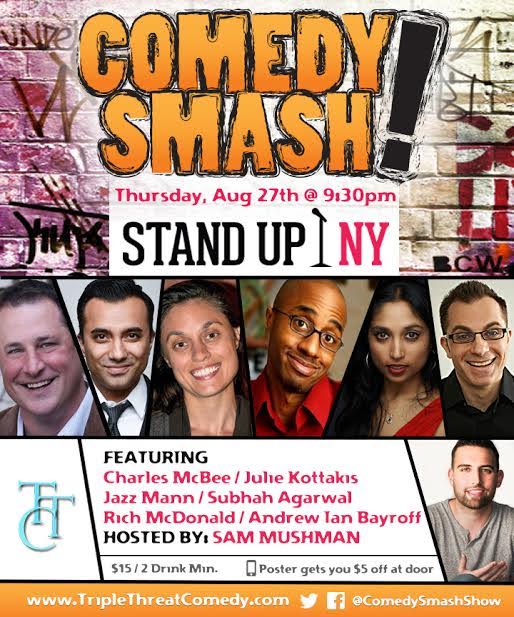 If your looking for 1 comedy show every month that is going to bring a loaded line up of talent, there is a new show at Stand Up NY comedy club that should be in the conversation. Comedy Smash! has been bringing some serious laughs Thursday nights at 930pm, and it shouldn’t come as any surprise based on the resume of Sam Mushman and his production company Triple Threat Comedy.

Right now the show is monthly, but according to Sam (the host of Comedy Smash) there are big plans for the new brand as the fall months are around the corner. “We pride ourselves on giving our audiences a consistent level of talent. In doing so, this should create brand recognition and word of mouth knowing your always going to be in for a treat if its a Comedy Smash show.”

Producing a successful show isn’t the only intention here. Triple Threat Comedy also produces a college comedy tour every fall semester in the tri-state area, and what a better platform to show these local universities the talent Triple Threat provides then with a showcase at Stand Up NY.

Sam explains, “Whenever your dealing with colleges, there is always a reason for them not to book you. The amount of variables involved can be overwhelming. That being said, instead of focusing on the road blocks, we have decided to give schools a reason to say YES, and see the level of comedy we provide first hand, in offering ticket packages to all the schools we are in touch with. Not only does this provide an outlet for new business, but it also gives the performers we book a free audition in front of schools who are already looking to bring a professional comedian to their school. Its a win win!”

The next edition of Comedy Smash is this Thursday August 27th 9:30pm at Stand Up NY. Mention Best Comedy Tickets for half off admission.