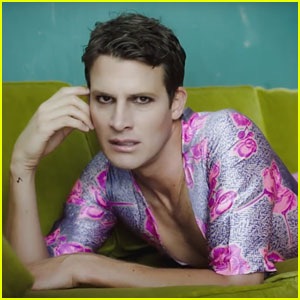 Comedian Daniel Tosh is doing his part to make the world a better place. He’s had a busy week dominating the internet, as usual.

Daniel Tosh recently did a shot for shot remake of a Selena Gomez’s “Good For You” with an appearance by Carrot Top as A$AP Rocky. Tosh writhed on the couch in a silk robe and oozed sexuality, no word on whether Ms. Gomez is jealous or not. Besides being the sexiest Selena Gomez impersonator on the planet, Daniel Tosh is also supportive of his fellow comedians.

Ritchie is a Canadian born comic that started in Minneapolis working in the improve scene and made his way to Los Angeles as a stand-up comedian. A talented comedian, Ritchie performed at the prestigious Just for Laughs Comedy Festival in Montreal in 2009 where his New Faces performance was recognized as one of only four “Standouts” in the festival by Time Out New York. In May of 2011, Ritchie released his first comedy album entitled “King Ding-a-Ling” on the reputable Stand Up! Records label to critical acclaim, making the Serious Comedy Site’s “Top 10 Comedy Albums of 2011”.

Andy Ritchie recently had a stroke after an operation and needs care to rehabilitate himself. As many people may know, medical bills pile up and as he has been unable to work to help facilitate the growing costs of the care. Tosh raised $25,000 to help his friend through auctioning off props from segments. Some of the auctioned off products included in the bit was a Kiffin’s Krimson Korner flag and a Pricasso painting of Daniel Tosh. During the show Tosh said, 25 grand is just a drop in the bucket for medical expenses, so “I’ve decided to do the responsible thing and gamble,” he said.

During the bit, Tosh said it was a no lose situation. He remarked that “If my Dolphins are winning, I’m happy. If they’re losing, Andy gets some much-needed help. If the Dolphins are only losing by three points, there is no God,” said Tosh. “So please, Tom Brady, once in your life, you and Bill [Belichick] use your shady, dishonest cheating powers for good in the first half only. In the second half, I hope you get the shit kicked out of you.”

The Patriots would go on to win the game 36-7. No word on whether the Patriots cheated, but if they get caught, at least it was for a good cause.