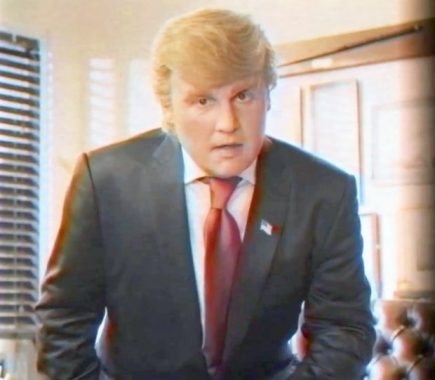 Donald Trump, the real-estate tycoon and media-savvy multibillionare has had an incredible life already. Constantly craving attention, Trump has gone from a wealthy heir to a tough real estate brand; football team owner to TV personality; and today we find ourselves looking at a potential Trump presidency. He’s won 12 of the 20 states so far in the Republican presidential primary, and Trump recently said of his supporters: “I could stand in the middle of 5th avenue and shoot somebody, and I wouldn’t lose any voters. Okay? It’s like incredible!”

Besides regularly making bombastic, off the cuff remarks that would have landed any other politician in the dog house, Trump is absolutely enjoying the media attention he’s getting. Trump, according to the co-founder of Spy Magazine, once said that The Donald “…would seem to require media attention like you and I need air or water”. If that’s true then Trump will be extremely excited when he sees that Donald Trump was recently played by Johnny Depp in a mocumentary with a theme song specially created by Kenny Loggins.

The premise behind the trailer is that The Donald created a biopic about himself in a made-for-TV format that was scheduled to air in the 80’s but was bumped off by Monday Night Football. While a clever premise, it doesn’t seem that far-fetched. After all, Donald showed up in Home Alone 2, showing Kevin McCallister how to get to the lobby of The Plaza Hotel, a hotel the Trump organization purchased in 1988, and then subsequently sold in 1995.