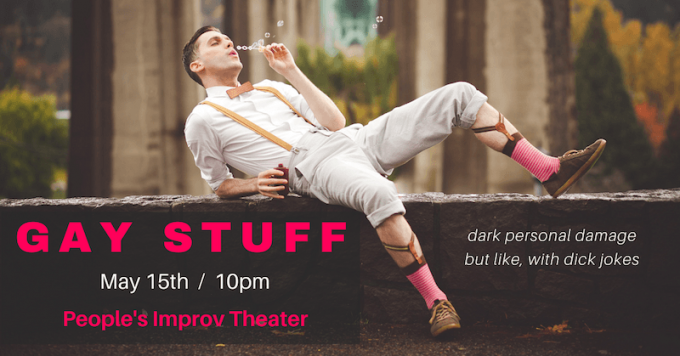 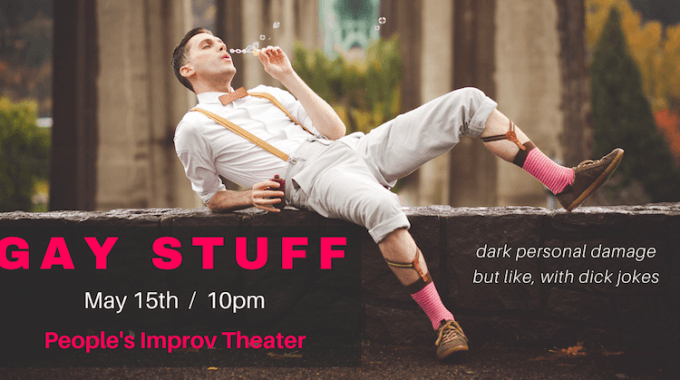 “It shouldn’t, and may not, work. But, you’ll have a ton to talk about, either way, so win.”
Jamie Benson

With the goal of bringing fresh funny bones to his team, Benson scouted for oddball creatives in local improv and sketch writing classes over the past 6 months. This new comic team originates from the D.C. political scene, modern dance landscape, the evangelical Christian world, and more. Christine Driscoll, an environmental policy fugitive, will present Mother’s Maiden Name, a performative rant about password security microaggressions. Experimental Bitch Presents member, Hannah Goldman, will introduce a stand-up set and the sketch Safe Space, exhibiting bro culture as both endangered, and homoerotic- which will be performed entirely by women.

Bored with the pretense of hot moves and high art, Benson, steeped in both modern and commercial dance cultures, may be more of a comedy nerd than dance-lover. After attending a modern dance-based school in Seattle, and auditioning with sexy ass music video types in Los Angeles, Benson has felt continually miscast in his own life. This is the first time he’s venturing away from dance to write, produce, and perform a purely comedic, live event.

The PIT was founded by Ali Reza Farahnakian in 2002, in a small black box theater located at 154 W29th Street. After outgrowing its original home, They moved to 123 E 24th Street on December 31, 2010, opening the PIT Striker and PIT Underground theaters. In 2015, the original PIT theater on W 29th Street was renamed The PIT Loft, officially becoming their third theater.

Hannah Goldman is an actor, writer, director, voiceover artist, and style influencer based in Brooklyn. She has trained at Duke Ellington School of the Arts and New York University’s Tisch School of the Arts. Goldman has performed at the Magnet Theater, WOW Cafe/Theater, Greenpoint Gallery, and HappyLucky no.1. She is currently working on a web series about the millennial lifestyle, as well as a dystopian podcast series about the Kardashians. Goldman is also a proud member of Experimental Bitch Presents.

Christine Driscoll is a podcast producer who worked on Gimlet Media’s Every Little Thing and Surprisingly Awesome. She is currently producing the first season of a musical advice podcast to come out this summer. Before working in podcasts, Christine was a sustainable policy consultant in D.C. where she wrote about renewable energy, climate agreements, and how to make and sell a more sustainable diaper. She has been performing for nearly three years but still has not reached the high theater of the Congressional Subcommittee hearings that inspired her to enter comedy. Learn more at christine-driscoll.com