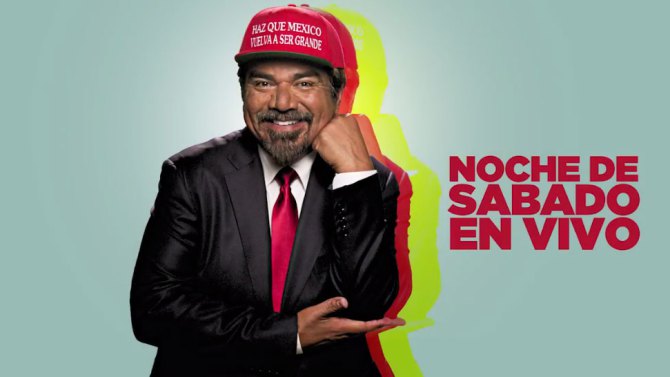 George Lopez — There Are Enough Racists for Donald Trump to Win

The website Funny or Die recently worked with George Lopez in a sketch comedy on the controversial Donald Trump.

George Lopez is making another appearance on Funny or Die where he will be playing Donaldo Trumpez. A mexican version of Trump. Donald has been under attack with bold statements and remarks that all Hispanics are rapists and criminals.

The scene above Trumpez host a TV Show “Noche De Sabato En Vivo” – Which means “Saturday Night Live” in Spanish – He jokes with he crowd and guest, parodies and characters.

“Humpty Trumpty sat on a wall,” sings the Mariachi band in full swing. “Humpty Dumpty had a great fall.” Trumpez quickly adds, “In the polls!”

Trumpet makes a speech in Spanish that says many of Trump’s controversial comments: Which talks about his female candidate as “ugly,” and that foreigners are to be rapist and they should build a wall between Mexico and the USA.

This was released one week before Donald Trump is set to host Saturday Night Live. The real estate mogul turned politician has been recently been called out by Hispanic groups that are trying to give Trump the boot from the show.

This isn’t the only time  the old late night host has talked against the GOP candidate. Recently this year, Lopez aired an anti-trump chant in Arizona while he was performing stand up comedy.

Many other well-known Hispanics have also stood up and made some publicly announcements against Donald Trump. The Director of “Birdman,” Alejandro González Iñárritu, former Mexican ambassador to the U.S. Arturo Sarukhán as well as actors Diego Luna and John Leguizamo.